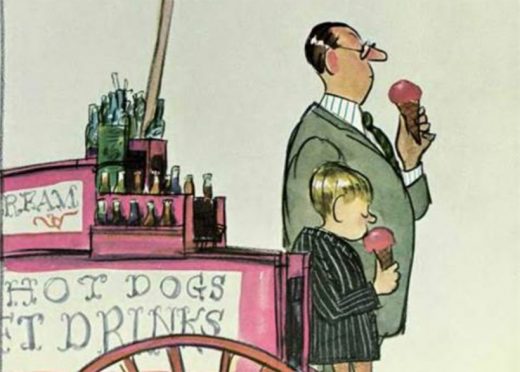 Ice cream can be a great political preamble.
B

utterscotch has a political side. You just need to listen for it. I had no choice.

Every Sunday after the Washington talk shows my father would scoop me up and take me to the local ice cream parlor. He didn’t drive, and six blocks was still within my laziness range. Once there, I’d order what I usually ordered, a butterscotch sundae, and once it arrived he’d begin his discourse. It was education through ice cream, and one speech I remember these days in particular.

The United States, he told me, was by nature a profoundly conservative country that through a twist of fate had been vaulted to global supremacy, which carried with it highly moral, do-good instincts.

The accident was World War II, a war the U.S. had little domestic interest in fighting and was thrust into only by Pearl Harbor. In this it was similar to the first war, which many opposed meddling in, in the end doing so very late.

America’s chief interest was its own insular wellbeing. Aside from brief colonial exercises in the Philippines and Teddy Roosevelt’s beloved Cuba, early American internationalism was above all a function of rapidly expanding business and trade interests.

America was in fact all about money and tycoons and progress at any cost, hidden if necessary, under a patina of nobility. The presidents of the late 19th and early 20th century were largely conservative figures who, in the spirit of Calvin Coolidge, believed big business was America’s business, and available for export.

The country’s social values, Roaring Twenties aside, remained those of a Puritan, God-led state uneasy with change, including granting suffrage. Americans were an unusually fair and decent people, but also prone to self-serving judgment they took to be absolute truths, particularly in times of distress.

That judgmental side could take on sudden and righteous potency, witness organized resistance to flapper-era urban decadence that eventually took the form of a constitutional ban on alcoholic beverages known infamously as prohibition. Few countries on earth had ever thought to make a God-fearers’ caution into giving militant temperance legal validity (the alcohol ban didn’t last but the abortion controversy — a deeper twist on temperance — is far from over).

Yes, the U.S. helped rebuild broken Germany after World War I, but it did so largely to boost its own economy. But in 1929, all that poorly arranged, have and have-not affluence came crashing down in exposing the country’s ample social weaknesses, including a near Calvinist (and defiantly stingy) belief in the catchall phrase, “There’s no such thing as a free lunch.” Predictably, European populism, reacting to the American cash shortfall, went into nationalist overdrive, led by German Nazism.

The “America First” slogan is hardly original, and was used in 1030s campaigns to keep the U.S. out of World War II.

But even FDR, for whom my father had helped write speeches, was far from a progressive liberal. His goal was to rebuild the country by any means necessary, including government intervention that immediately produced wrath from the business community that he was attempting to exert state control over in the economy. In fact, it was the industry brought about by World War II and not FDR’s myriad social programs that had helped right the American ship.

Americans, he continues, freed from the constraints of the elite coasts (mostly the East), were common sense, dollars and cents people who had little interest in cosmopolitan thinking let alone intellectual pretentions (a timid urbaneness that, long after my father ended his soliloquies, would backfire on the likes of too-eloquent Barack Obama, mistakenly marketed as a savior). That which Americans didn’t understand elicited immediate suspicion, in turn triggering an underlying inferiority complex that often fell back the only true guidance, God’s; the same God the almighty dollar bill has always said we all should trust in.

Several postwar American presidents had championed activism and social justice – Harvard Brahmin John F. Kennedy with the FDR-style Peace Corps, indecorous Texan Lyndon Johnson with his irrepressible Civil Rights crusade — but failed to account for the resistance to both World War II ennobled efforts, which ruffled the already bloodied feathers of racial inequality, its lynch mob thinking buried deep (as it till remains, these days lapping over into the equally zealous immigrant resentment).

Simply put, the most sonically and politically ambitious nation on earth wasn’t fond of straying too far from the rigorous nostalgia of its apple pie youth, never mind if the nostalgia actually possessed a real dimension.

America very much wanted the role of post-war socially liberal nation, and opponent to slavish Communism, but it still had slavery and the massacre of Indian tribes to reckon with in its own checkered past.

Ideally, it should be run by a benevolent tycoon based in New York City who’d somehow reconcile the country’s business ambitions with its political ones, all the while taking care not to offend God and his American denizens. Such a man — a “justly” intolerant lay preacher unfettered by decorum — could embody all of America’s most-craved instincts: ambition, toughness toward “aliens,” and apolitical verve (since politicians were crooks). This tycoon, like FDR, could rule forever, so long as economic circumstances shone by the dawn’s early light.

My father died not too many Sundays later, at the height of the presidency of Richard Nixon, who exalted the “silent America” of his conservative supporters, people who rightly had no patience for the lies spun by the Eastern media elite. Had he lived six months longer he would have seen Nixon crash and burn, annihilated by his own meddling and corrupt inner folly.

But that downfall would not have changed my father’s ice cream days’ mind. Some kind of loud preacher, unconventional and as rude as a tractor engine snapped to life, was on his way to America’s Jerusalem, not to slouch but to posture and boast and make at least some feel they had a man in the don’t-tread-on-me mix, and now they do — though I miss the man who foresaw it all, and also paid for my sundae.