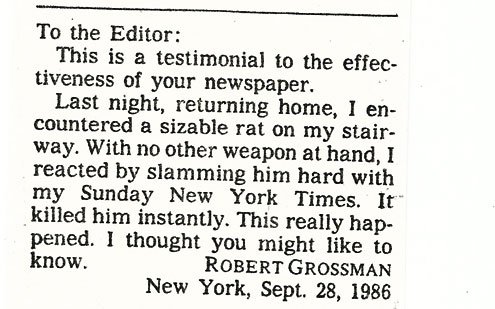 Have paper, will assassinate.
L

etters sent to daily newspapers for publication once faced a Draconian filtration process that few missives survived intact, if they survived at all. Usually, dailies allotted a page or less to so-called letters to the editor, forcing opinion page editors to sift carefully through incoming mail for reader comments governed by a range of feelings, including outrage, sarcasm and (rarely) humor.

On average, one percent of all letters received were ever published and almost all were edited and sometimes trimmed to a tenth of their original length. Though readers were asked to keep their letters short (250 words was the norm), few complied, since many were effusively driven by outrage.

For a century, the letter to the editor was the only way to disagree publicly with a published viewpoint. The regular writers of such letters were often exasperated, since some wrote dozens of letters over decades never to see one published, let alone acknowledged. Letter-writers who possessed some form of celebrity were generally favored. In the New York Times and Washington Post, which had a full-page letters sections, dissenting academics and politicians were a staple, as were letters written by the subjects of interviews or published reports.

Even presidents occasionally wrote letters to the editor; these missives were inevitably published. The Watergate scandal of the early 1970s saw a surge in letters to the Washington Post (which employed reporters Bob Woodward and Carl Bernstein), but most went unpublished. There was no place to put them.

This written means of challenging the findings or the views of a major newspaper is now archaic. Online publication has supplanted letters as a forum for contesting (or praising) opinions whether in print or online. This has led to a plethora of web commentary that is both unfiltered and uncensored. The pitch of the commentary, formerly toned down for print, is now loud and unbridled, typically offensive. The castle walls have fallen.

But selecting and abridging letters was once an art that subeditors, who sought to balance reader views, took very seriously. From time to time, though rarely, they allowed subversive wit into the staid mix. A charming example of this came in the form of this terse 1986 letter published in the New York Times Sunday edition, under the subhead “Clout.”

This is a testimonial to the effectiveness of your newspaper.

Last night, returning home, I encountered a sizeable rat on my stairway. With no other weapon at hand, I reacted by slamming him hard with my Sunday New York Times. It killed him instantly. This really happened. I thought you might like to know.