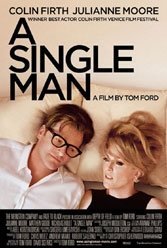 Prince of fashion design Tom Ford’s directorial debut is a gorgeously shot, dream-like, poignant journey through the final days of a gay man grieving the death of his long-time lover. Set in Southern California in the 1960s, the movie is an adaptation of an autobiographical novel with the same title by Christopher Isherwood. Colin Firth plays the 52-year-old English professor George Falconer with utterly convincing suppressed anguish. Julianne Moore is equally believable as his alcoholic and adrift friend Charley.

Depending on your tolerance for visual extravagance — Ford has George’s world bloom with color each time he sees or experiences something that warms his heart — you’ll either find the infusion of color into the film gimmicky or (as I did) surprisingly touching.

Ford’s greatest accomplishment with is his ability to convey the main character’s experience of living in a society out of sync with his own sensibilities. Ford does this through quick cut-aways from the central action to details that spring out at George — the sweaty torso of a man playing tennis nearby as he talks with a colleague; the way his secretary’s hair falls; and the codified glances from other gay men.

It’s rare for a film to give such a powerful illusion of how the world feels from inside another person’s head and heart. Of course, the world depicted by Ford is esthetically idealized, a fashion director’s version of reality, right down to the wardrobe brought to you by Tom Ford. Firth’s compelling performance, however, saves the movie from superficiality.