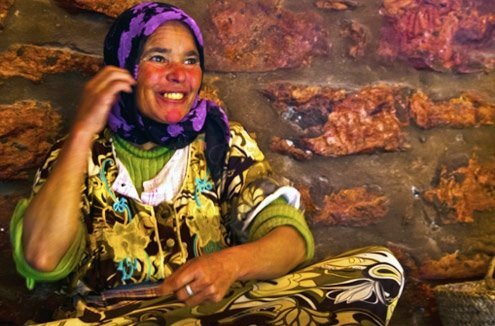 er face was bronze with native glory, straight from a National Geographic photo spread. But this was no magazine. She was in front of my camera in her woven robe, headscarf and secret smile. I was delighted to have an opportunity to capture her image. I was in the High Atlas Mountains in Morocco and the Berber woman was grinding Argon seeds into oil. It was a stop on a private tour and we were the only ones there. I was having an authentic experience, or so I thought.

Five minutes later, a van of Japanese tourists arrived in a convoy. They took out their zoom lenses and snapped away at the woman just as I had done. I was deflated. When I got home and looked at travel blogs posted by visitors to Morocco I saw this same woman’s face everywhere. My experience had been staged and choreographed to sell Argon oil. There was nothing authentic about it.

Later in the year, when I went to Ireland, I didn’t expect authenticity. My friend and I knew we were making the requisite tourist stops. We’d booked two tours. Bunratty Castle featured a medieval village with thatched roofs and farmhouses. Hot scones were available at hut #15. We could have been at historic Williamsburg. At the Giant’s Causeway, the bus unloaded us for an hour, enough time to walk around, snap a photo, feel the North Atlantic and get back in. In the end, I’d checked off all the “must see” boxes and flew back to New York City.

But once again, looking at my photos, the same pattern emerged — one of sameness; one in which the images looked alike.

Between Lonely Planet guidebooks and the wagon train of tour vans and busses, the world we were being invited to observe was contrived and pre-packaged. We didn’t really see the country we were visiting, but instead a stage prop that tour operators either wanted to show us, or what they thought we’d pay to see. Tourists all over the world have a good and safe time. They’re brought close to sights featured on web pages, there’s a souvenir to buy, and then they go home. Everyone’s happy.

After several trips abroad, I craved a day trip closer to home. My friends and I went upstate New York to pick apples. The hills along the Hudson River in October were soft hues of orange and raw umber. The smell of autumn’s slow decay was unmistakable and we turned down a winding road to the Wichlow farm where you could pick your own apples. Rounding a corner, there it was again: a tourist attraction.

A man stood flagging traffic as a side field became a parking lot. Minivans filled with children unloaded to ride a flatbed pulled by a tractor. Another line waited for deep-fried doughnuts or stuck their head in the cow cutout and snapped a photo. Small groups gathered in the orchard along the hill and picked a Winesap or Jonagold.

I tried focusing instead on the beauty of the afternoon as the late sun shone on ripe fruit. I took my time picking each apple, gently twisting them counter-clockwise and listening for the snap of the stem. I polished one bright red Cortland with my shirt and smiled. I broke the skin with my teeth and took a bite. The crisp apple felt alive and the sweet flesh filled my mouth. I smiled as the flavor filled my senses with autumns’ past.

At last, I thought, my own authentic moment. It was far simpler than a trip to North Africa or Ireland, though it did take a bit of weaving though the cider line and picnic tables. But among rows of crooked trees, one autumn day and its delicious accomplice — a single apple — had delivered.