A short history of catnip 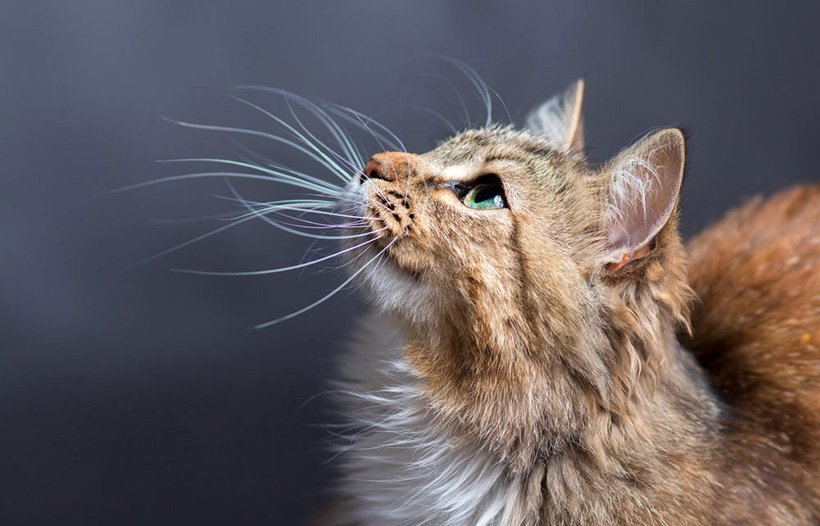 Cats can side on your lap and cuddle affectionately — or not.
T

here’s a big white and grey cat that every so often comes out of my crawl space. Herman is his name. I’ve been forewarned not to feed him, and I resist the urge every time. Whenever I see him I think to myself how much easier it might have been to stay a cat lady forever.

Instead, I have a four-month old, Julia, who is as cute as she is all-consuming.

I wasn’t always a cat person. Growing up, we had a black toy poodle named Andre, born the same year as I was, so at times he felt more like sibling than my older brother Michael. I read books to “Dre Boy” (his nickname), and dressed him up in my doll clothes. One outfit had a beret, which I thought was appropriate, since Andre was a French name. When he got super excited, his little boy part would shoot out like a little tube of lipstick. Cats, I would later learn, were subtler.

I can’t imagine cats making a big to-do about goodbyes.

After Andre died, my parents got their first cat, Chiffon, a Persian with a thick, luxurious coat. She didn’t want much to do with us, only occasionally giving us the pleasure of sitting on our laps. But we loved her anyway, and when she died, we buried her in our back yard.

After that, my parents got three cats, one right after another. My brother and I were away at college, so the cats were like new kids. Carmen came first, another Persian, about half the size of Chiffon. If you shaved off all of Carmen’s caramel-colored hair, she might have been the size of a gerbil. She had a pushed-in face and wheezed through the tiniest nose I’ve ever seen. To elevate her stature, my mother named her Carmen, after the first opera my dad ever sang in.

Then came Samson, a big orange tabby my dad called his farm cat. Samson got his name when my dad saw him once arch his back in a way that reminded him of Samson in the Bible. Samson was sweet — really more dog-like than cat. Not only would he sit on our laps, he would knead our bellies, as cats do when they think you are their mother.The third cat was a hunk of a gray-white mixed Persian named Leo, after Leopold, the person who introduced my parents. Leo had a stately calm that balanced out the rivalry between Carmen and Samson. 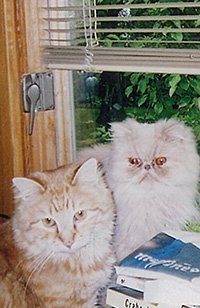 Samson, left, was a big orange tabby, while Carmen had a pushed-in face and wheezed through the tiniest nose I’ve ever seen.

I had cats in Italy, too. My boyfriend and I took in a stray we called Lia. She had three kittens on our bedroom floor. I tried to help with the delivery, but she wouldn’t let me. We named the kittens Prima, Macchia and Ciccio, and right after being born, they suckled on Lia. Whenever we played with them and Lia was in the other room, she came running. I learned something about maternal instincts from Lia.

When I moved back home, I befriended my parents’ cats. Carmen would wake me up in the morning by tapping her paw in my face. All three cats followed me around the house, planting themselves near me when I read or wrote. After my mom died, they slept in my parent’s bed, surrounding my dad like sentinels. They were house cats par excellence, entirely sheltered. When my friend from California brought over freshly grown catnip, they got one whiff and went into hiding for three days.

A few years ago, my dad gave the cats away. He was dating a woman who was allergic to cats, and he anyway felt that they were too much for him to take care of. All three cats got to stay together. I never got to say goodbye to them, which is probably appropriate, since I can’t imagine cats making a big to-do about goodbyes.

Meanwhile, I briefly had a dog — a difficult but loveable animal whom my seasoned dog owner friends cautioned me against. They also hinted at a deeper truth: Not only was I a cat person: I was a cat—independent, selectively affectionate, and more prone to study than surrender.

Now that I have an infant, I’m living the truism that infants are a lot like puppies: Irresistibly cute, hopelessly needy, and intensely cuddle-able. Since I’ve naturally surrendered to this little being, I’ve peeled back my cat nature. This is especially true since instead of long naps, Julia, go figure, takes catnaps.