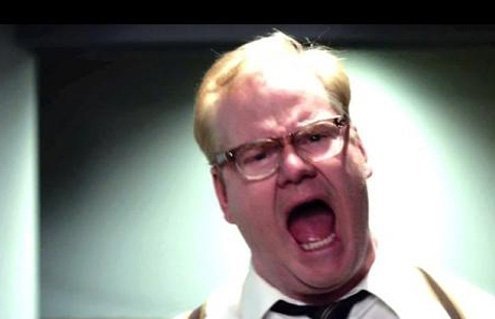 In the 1961 Yale experiments dramatized in "Experimenter," test subjects ("teachers") were asked to give electric shocks to those who failed to answer a question correctly, but it was all a hoax to determine compliance to authority.
I

n director Michael Almereyda eccentric brain, an elephant in the room is, well, an elephant in the room. And no, the story isn’t about jungle animals. Instead, “Experimenter” covers the career of social psychologist Stanley Milgram, whose revealing but controversial obedience experiments turned out to be inescapable elephants in career defined (and caged) by his early and groundbreaking work.

In 1961, when John F. Kennedy was president, Adolph Eichmann on trial in Jerusalem, and the Holocaust still a fresh scar, Milgram — an unapologetic Jew (“Milgram means pomegranate in Hebrew,” he tells one and all) — concocted an experiment intended to gauge human compliance to authority.

He drafted volunteers, gave them questions to ask a test subject, and had a frocked assistant insist that anointed “teachers” apply electric shocks to “learners” each time the latter got answers to questions wrong. The shock box was rigged, a fiction, but the “teachers” didn’t know. Still, they mostly plowed ahead through misgivings and fake cries of pain to administer the wrong-answer punishment. In a nutshell, they followed orders.

Almereyda shrewdly casts the cerebral-looking Peter Sarsgaard as Milgram, a mild-mannered if affected academic who early on has a sense that people are little more than “puppets with perception.” Part of him wants his experiments to fail, exalting free will, morality, a compunction to say no to the worst of things. But that doesn’t happen often, something he finds “terrifying and depressing.” His experiments — faithfully reproduced in the movie the way they look in documentary footage — soon ran afoul of the academic establishment, with Milgram eventually pushed from Ivy corridors to NYU for dubious ethics — a charge that rightly bewildered him. He later came up with other behavioral experiments, but none ever dislodged the pervasive obedience legacy, and the elephant recurs.

Visually, Almereyda concocts a strange if affected pastiche, placing his film’s leading characters in the foreground with period-piece stills in the background. The result is a kind of cardboard verisimilitude that somehow suits the academic merry-go-round on which Milgram was trapped. The approach gives both Milgram’s life and experiments a strangely theatrical quality, which makes sense since TV eventually adapted the Milgram story to its own more plastic needs. “People don’t have the resources to resist authority,” says the unflappable Milgram, who could often seem robotic, a trait Sarsgaard captures. The supporting cast, led by Winona Ryder as wife Sasha and fellow teachers and test subjects, all do what’s asked of them.

Ultimately, this is an exercise in mild surrealism, since Milgram, who died in 1984, is made to step out of his life, comic book style, to tell his story. At one point Almereyda inserts a real “Candid Camera” skit in which three actors insist on looking in one direction in an elevator. The fourth person, unaware of the ruse, and despite his tendency to look the other way, eventually becomes self-conscious and changes his posture to comply with others.

We are our orders, unless or until we decide we can’t or won’t carry out what we’ve been instructed to do. This will never be a popular or traditionally entertaining film, but it’s a valuable one. The results (and morality) of Milgram’s research are still pondered half-a-century later.