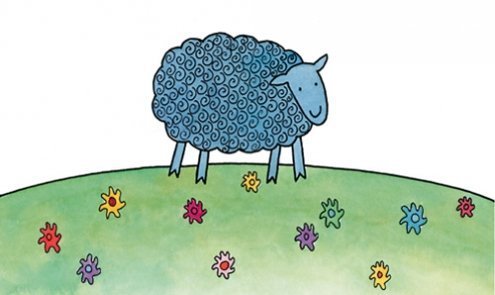 Where is the Green Sheep? Nowhere near the ones drenched in red.
I

’m woefully out of practice when it comes to telling stories. That’s probably because I don’t have any English-speaking friends in the sticks. My husband’s eyes usually glaze over whenever I start one, as if he can’t be bothered interpreting my terrible Italian and even worse hand gestures.

With that in mind, I’m absolutely terrified that what follows this disclaimer will become a “you had to be there” kind of story. I will persevere nonetheless. Feel free to interrupt with any questions.

So, I was driving home from another English tutoring lesson with the world’s brattiest preteen and stumbled on a pile of dead sheep in the middle of the roundabout. I almost drove into a pole.

They were just lying there in the perfectly manicured lawn and rosemary bushes, which I just realized was eerily apt considering all the times I’ve eaten lamb with rosemary. One looked like it was in the middle of an appointment with the butcher’s knife. The top half was furry and perfectly fine, while the bottom chops were exposed, dare I say frenched? The phrase “from pasture to plate” came to mind, but I’m not sure that’s what its inventor intended. Except not all of them were dead. One of them struggled to move without, to put it delicately, parts of its throat.

I was speechless. I looked around aghast for the nearest police officer. Luckily there were about 50 of them milling around doing absolutely nothing. Obviously, I wasn’t expecting them to whip out a murder victim white sheet, but across the road was a children’s playground — the scene was practically an invitation for years of therapy.

I should clarify that I wasn’t alone. Most of the town was there, staring at the dead sheep and their owner — a local farmer who, as part of a protest (more on that later), had driven his truck laden with the dead and dying animals and parked in the middle of the roundabout.

The ruckus had caused quite a bit of traffic. In Manciano, four cars constitute traffic. But it’s tourist season, and if you park a load of dead sheep on the main roundabout and thoroughfare, you’re going to get people slowing down to look. But don’t worry; the carabinieri were directing traffic as if that was their only priority.

Days have passed since the incident and I still can’t drive past that roundabout without seeing the dirt-covered fleece or blood dripping from the truck’s cab. I can still picture the farmer’s face — the ringmaster of the macabre, screaming at someone and pointing at the carnage he had wrought on the town.

Suffice to say you could never pull a stunt like that in almost anywhere else in the world without having your ass hauled off to jail. I still can’t understand why the police didn’t do anything. He spent most of the morning there.

His protest was admittedly an act of desperation. Wolves have been terrorizing livestock in the area for decades. The Maremma’s furry friends are particularly prone to a local species, the Apennine wolf, which also happens to be protected. From what I understand, you could once shoot them but now you can’t.

This isn’t the first gesture of retaliation we’ve seen. A couple of months ago, a farmer nailed the dead carcass of an Apennine wolf in the main piazza of a nearby town. Slaughtered sheep are an almost weekly fixture on social media and there have been countless crisis meetings.

I’m sure the farmer knew his gesture was pointless. The legislation that protects these wolves isn’t local and I don’t think the regional or national government cares about a couple of dead sheep in the middle of a roundabout in the middle of nowhere.

But I care. I care because one my favorite books as a kid was “Where is the Green Sheep?” I don’t know, but I do know where the red ones are.

I also care because what that farmer did was illegal — even by Italian standards, and nobody did a thing, as usual. I doesn’t matter to me if wolves eat your entire flock, have the decency not to expose children to a sight that could traumatize them. And for once, would it be too much to ask local law enforcement to actually, I don’t know, enforce the law?

That’s the end of my story. Hoping you “liked” it may be too much to ask.