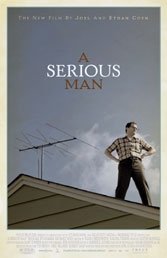 Trust the Coen Brothers to channel the Jefferson Airplane into a cosmic talisman. A snarling Grace Slick opens the band’s 1967 hit “Somebody to Love” with the lines, “When the truth is found to be lies/and all the joy within you dies…” In many respects the movie follows suit.

We’re in that pre-Woodstock year and very Jewish thirty-something Minnesota physics teacher Larry Gopnik (a convincing Michael Stuhlbarg) faces money woes, a decision on tenure, a collapsing marriage (he’s exiled to the Jolly Rogers motel), two loony teenaged kids, a bigoted neighbor, and an ailing live-in brother who gambles while scrawling universe-explaining equations in a notebook. A staid life once-anchored in suburban Judaism is suddenly scuffed and existentially rattled. Earnest and faithful man that he is, the apparently Godforsaken Larry seeks meaning from Rabbis. But they speak in riddles and most everyone else is either self-involved or hormonally distracted.

Never mind the near picture-perfect portrait of 60s Jewish suburbia, this is a wildly imaginative black comedy played out in a world where dog is god spelled backwards. The Coen’s are at their best when they zoom in on the wacky detritus of day-to-day life, and the Minnesota ranch-home 1960s are a dream landscape for caricature.

The movie opens with a fable and spreads like comic Voodoo before delivering an ending Fellini and Bergman would envy. The midsection, including messages carved into teeth, a South Korean student called “Clive”, and a pot-smoking neighbor’s wife, is an affectionate spoof of teenage-prism Judaism the Minneapolis-born Coens obviously remember well. In “A Serious Man,” they’ve delivered slice-of-life memorabilia salted with wild doses of Yiddish folklore and channeled through the Airplane, whose opening lyrics get their just due.