A sense of public decorum 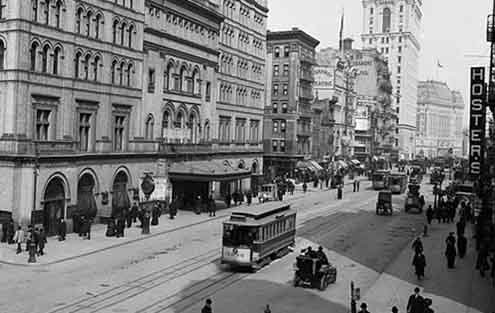 The original Metropolitan Opera House, demolished in 1967, was located at 39th Street and Broadway in Manhattan.
I

recently saw “The Opera House,” a delightful documentary by Susan Froemke about the Metropolitan Opera’s 1966 move from its beloved and ramshackle home in New York’s theater district to its current location in the purpose-built, utopian “cultural center” of Lincoln Center.

Intentionally or not — Froemke probably began the project before the 2016 election — an arcane, high-culture topic quietly exposes telling contrasts between the mid-1960s and today.

The most visible contrast is sartorial. From union leaders to divas everyone wears hats — male and female — and gloves, dresses and suits. This careful self-presentation turns out to be a deeper metaphor for the long gone sense of public decorum that permeates the film.

Lincoln Center was a complex and conflict-filled project, but there is not a raised voice in “The Opera House.” With a punctilious lack of hypocrisy, Rudolf Bing, the Met’s artistic director, gently told a well-known soprano she would never sing at the Met because he did not like her voice. When his over-ambitious plan to stage four new works veers towards chaos, Bing calmly admits his responsibility; his gaunt face the only sign of his stress. When an important piece of scenery malfunctions during the dress rehearsal, Franco Zeffirelli takes a deep breath, rolls up his cashmere sleeves and calmly asks the cast to rework the staging. The center’s many architects made for a snakepit of big egos that included Philip Johnson and Eero Saarinen. Yet they stayed outwardly civil and collegial — in their white shirts and ties.

Lincoln Center marked the apogee of WASP power, which also managed to be civil. Great entitlement came with great restraint and obligation. Lincoln Center reflected the taste, values and power of the Rockefeller family. Yet the center could not have been built without the apparently relentless fund-raising pressure David Rockfeller placed on all those within the wealthy circles he moved. Donate was the word.

It wasn’t all style and no substance. In its 1950s and 60s planning and building phases, Lincoln Center exposed issues as vital and contentious now as they were then. In the midst of the Civil Rights movement, Bing chose African American soprano Leontyne Price — whose interviews in the film sparkle — to sing the opening night performance. First Lady Ladybird Johnson flew Price’s parents from Mississippi as a surprise to their daughter, a gesture whose sheer niceness seems inconceivable today.

In words that now seem as quaint as the gloves and fedoras at the ceremony, President Dwight Eisenhower’s 1959 groundbreaking speech heralded the creation of a “real community of interest through common contact with the performing arts.” Lincoln Center was a geopolitical act, Eisenhower said. “Here will occur a true interchange of the fruits of national cultures. From this will develop a growth that will spread to the corners of the earth… Here will develop a mighty influence for peace and understanding throughout the world.”

Indeed, the famous chandeliers, whose design was a serendipitous accident recounted in the film by the designer’s daughter, were Austria’s repayment for the Marshall Plan’s postwar reconstruction.

Building the new home for the Met was not some rosy “Mad Men”-era fantasy. There were age-old conflicts between special interests and between artistic vision and budgets. At Lincoln Center’s core was an urban original sin. Robert Moses, New York City’s imperious god of urban renewal, chose to build Lincoln Center on a mixed-race, working-class neighborhood that had attracted the greedy eye of his “Slum Clearance Committee.” When courts blocked the neighborhood’s demolition, the city seized the land under eminent domain and callously ousted 7,000 people from 18 city blocks. Neighbors were forever scattered among low-income projects across the city, which gutted thriving small businesses and hardened racial segregation. Considering that Froemke relied on nothing more than old photos, newspaper clippings and interviews with retired divas, “The Opera House” is surprisingly full of dramatic tension and suspense. Despite the proliferating rivalries, mishaps and artistic overstretching, the question of the day was whether Lincoln Center would open on time.

Froemke’s gift for achieving so much with so little was underscored when I saw Steven Spielberg’s “The Post” a few days ago.

In “The Opera House,” drama and message seep quietly from the story. In “The Post,” a full-blown Hollywood exercise, they feel forced, especially because Spielberg elevated the Washington Post‘s role in the Pentagon Papers and implied it was more important than The New York Times’. Evidently Spielberg felt the relationship between Post, owner Katharine Graham (Meryl Streep) and then-editor Ben Bradlee (Tom Hanks) would be better at getting his medicine about freedom of the press down audience throats than Daniel Ellsberg, who leaked the Pentagon documents, and the Times’ Neil Sheehan, who obtained them.

“The Post” falls for the seductive and slippery promise that docudramas make history more exciting, more palatable and more message-able than a documentary. However, Spielberg’s choice of storyline, numerous anachronisms of clothing and language — and Streep’s Julia-Child-upper-class-lady speak — end up underscoring the real risk of docudramas. They cannbalize their own credibility.

Froemke’s “The Opera House” evoked nostalgia and it made strong points, which “The Post” hoped to do. Of the two films, it is the more instructive, and the truer. Froemke did all this without a Hollywood budget or Tom Hanks and Meryl Streep. In the end, her slice of history is far more entertaining.