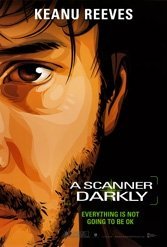 It’s seven years into Anaheim’s future and southern California is amok in Substance D, a toxic flower whose capsules looks suspiciously like pharmaceutical ibuprofen. Unaware that he’s a pawn in larger game, undercover drug cop Bob Arctor/Fred (Reeves), dressed in a “scramble suit,” tantamount to an imagistic phone scrambler, spies on drug buddies Barris (Downey Jr.) Ernie (Harrleson) and his beloved Donna Hawthorne (Ryder). He answers to laconic “scramble suit” boss Hank, who isn’t what he seems, and defers to Donna, who gorgeously morphs at will. Gradually, Bob-Fred turns into an addict and vantage point collapses. The protean animation makes this a post-Disney must-see.

Linkleter hews devotedly to Dick’s sincere but humorless story (There are breaks: “Your sins will be read to you ceaselessly, in shifts, throughout eternity,” a mythic godhead tells a suicidal druggie). Dick lost a gaggle of friends to LSD and their kin so this fantasy — from a 1977 book by the same name — is no joke. “God’s ammo is to transmit evil into good,” an agent tells Donna at the end. Linkleter’s only significant ammo is the holograms, and he deserves a feather for an original approach to Dick’s weather-beaten material.