“A rather good thing” 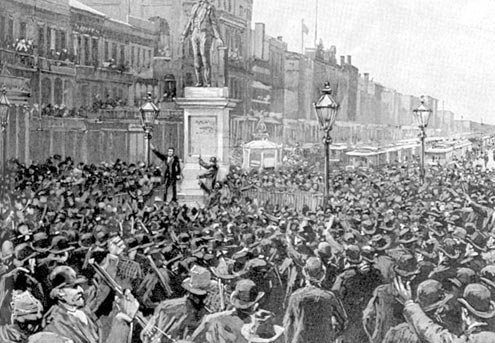 Newspaper drawing of the lynch mob that attacked Parish Prison in New Orleans in 1891.
O

n the evening of Oct. 15, 1890, 32-year-old New Orleans Police Superintendent David C. Hennessy was returning from a City Hall board meeting when he was gunned down by five men outside his home. He was rushed to Charity Hospital where he remained alive for 10 hours. Just before taking a turn for the worse, Hennessy leaned in to Police Captain William O’Connor and allegedly uttered his last words: “Dagoes did it.”

Scarcely invoked in history books, Hennessy’s assassination represents a major turning point in American history. It precipitated the largest mass lynching in the nation’s history, introduced America to notions of the Mafia, and incited a major standoff between Washington and Rome.

Immediately after the shooting, 250 Italians were rounded up, virtually all without probable cause. Of this group, 19 men were eventually indicted, nine of who endured a sensational trial that ended in a mix of mistrials and acquittals.

Convinced the jury was bribed, outraged by the verdicts, and galvanized by fear of the “Mafia,” a terrifying new word in American usage, some 20,000 people stormed Parish Prison on March 14, 1891 and lynched the nine men, along with two other Italians being held on unrelated charges. The remaining Italian prisoners managed to escape.

Though the mob lynching seemed spontaneous, it was in fact premeditated. Several community leaders had incited the crowd. Some belonged to the 12-man “Execution Squad” that carried out the actual killing.

“The Italians had taken the law into their own hands and we had no choice but to do the same,” said New Orleans Mayor Joseph A. Shakspeare. Shakspeare, who had personally appointed Hennessy to the police superintendent, loathed Italians. In a scathing letter written eight months after Hennessy’s murder, Shakspeare insisted southern Italians and Sicilians were “from the worst classes of Europe… the most idle, vicious and worthless people among us.”

Theodore Roosevelt, then a new appointee by President Benjamin Harrison to the United States Civil Service Commission, suggested the lynching was “a rather good thing.” He would be elected president three years later. The New York Times, writing about the event in a March 1891 editorial, referred to “Sneaking and cowardly Sicilians, the descendants of bandits and assassins.”

Though the United States boasts a proud tradition of openness toward immigrants, there is no lack of dark side incidents. “America’s other heritage includes suspicion, hostility, abuse and even death, leveled against ethnic groups as they arrived one after another in waves over the past 2 1/2 centuries,” wrote author Ed Falco in a 2012 article titled “When Italian Immigrants Were ‘the Other’.”

This concerted marginalizing stretches back to The Naturalization Act of 1790, which inspired the first mass waves of 19th and 20th century immigration. The legislation opened up citizenship to European immigrants, “free white persons” of “good moral character.”

Generations of olive-skinned Italian immigrants suffered for not being as “white” as their Northern European counterparts. Many who flocked to the U.S. to earn money by working short stints before returning to their families in Italy were excoriated for failing to learn the language or culture. Immigrants who arrived during the delicate era of Reconstruction, the post-Civil War healing period (1865-1877), were completely ignorant of the racist attitudes, particularly in the South. Before he became governor of Louisiana, John Parker, a Roosevelt insider and one of the organizers of Hennessy lynch mob, reflected the period’s mood when he remarked that Italians “were just a little worse than the Negro, being if anything filthier in [their] habits, lawless and treacherous.” Italians in 19th-century New Orleans who sold food to African-Americans, or worked alongside them, elicited particularly noxious hatred. While more African-Americans were lynched during the Reconstruction Era than any other group, according to the 2004 documentary “Linciati: Lynchings of Italians in America,” an astonishing 50 Italians were reported to have been hung in states as varied as Washington, Colorado, Illinois, New York, Florida, Louisiana, West Virginia, and Mississippi.

Most targeted were Sicilian immigrants, who flocked to the U.S. beginning in the middle of the 19th-century (some four million were admitted between 1880 and 1921). Their influx coincided with the rise of American crime syndicates, or “families,” known collectively as the Mafia. The first account of Mafia activity in the U.S. was published in 1869 in New Orleans, among the first Italian underworld hotbeds. New Orleans’ Second District, wrote the Times-Picayune newspaper, was heaving with “well-known and notorious Sicilian murderers, counterfeiters and burglars, who, in the last month, have formed a sort of general co-partnership or stock company for the plunder and disturbance of the city.”

New Orleans was also where Giuseppe Esposito, billed by the FBI as the first-known Sicilian Mafia member to leave Italy for America (he was actually from Campagna), hunkered down. In 1881, he was arrested by none other than Hennessy, then a detective, charged with murder of 13 people and kidnapping dozens of others, and deported to Italy. “As a result of the Esposito affair,” writes author Richard Gambino in “Vendetta: The True Story of the Largest Lynching in U.S. History,” “David Hennessy was celebrated as a model of American manhood throughout the United States, Great Britain, and continental Europe.”

But in becoming a star, Hennessy, no stranger to death threats, also became a target. Esposito’s criminal enterprise was divvied up between New Orleans’ preeminent Mafia families, the Matrangas and the Provenzanos. Members of the Mantranga clan, along with Joseph Macheca, the city’s wealthiest Italian, were accused of the Hennessey murder, with Macheca pegged as the ringleader. Italians with no proven links to the Mafia were also arrested.

Some suggest the Mantrangas and Provenzanos united to kill Hennessy after he launched an investigation into a violent street feud that erupted between the two families. Another say the murder was a “frame up” by those eager to commandeer and split up Macheca’s lucrative, fruit importing business and oust the Mafia from New Orleans. Ultimately, however, it was the Italians who paid. A grand jury investigating the lynching issued no indictments, saying the number of participants made the responsibility collective.

Finally, in 1892, the U.S., feeling defenseless against Italy’s navy, the third largest in the world at the time, paid Italy $25,000 in reparations and got to work building the new modern navy that was instrumental in winning the 1898 Spanish-American war, facilitating America’s rise to major world power status.