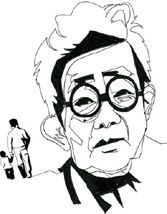 Oe's son Hikari is a central thought in his figure.

By Kenzaburo Oe, translated from the Japanese by Kunioki Yanagishta and Willian Wetherall

“Why can’t Japan produce writers who can truly encourage their readers?” Ma-chan, Oe’s 20-year-old narrator and a student of Céline, finds the scrawl in a book while browsing a French literature study room in Tokyo. Oe’s own reader encouragement is modest in this oblique novel concerned variously with the weight of famous fathers, depression, the exuberance of deformed sons, and Christian “matters of the soul.”

When her father, a respected if depressive novelist known only as “K,” retreats from Toyko, to teach in California (“emergency shelter”), wife in tow, Ma-chan is left behind to care for her mentally handicapped, epileptic younger brother Oyu-san, known as “Eeyore.” “K” is feeling “the pinch” — the introverted angst 1994 Nobel laureate Oe assigns to those who those who struggle with life’s purpose and, in “K’s” case, the guilt of paternal estrangement. Existence with exuberant (and musically gifted) Eeyore gives the awkward, “robotized” Ma-chan ample time to contemplate just what’s “wrong” with her aloof father.

Oe’s fiction is often thinly veiled memoir: “K” Oe is the father of Hikari, an autistic, brain-damaged child who developed into a composer. The story slows when Ma-chan and “K” — in letters and parallel thoughts — debate Western literature, music, and theology (St. Francis, Blake, Céline, Michael Ende, Tarkovsky, K.V. — Kurt Vonnegut). It is Oe’s way of resisting Japan’s heroic provincialism and re-examining his own fiction. But it is “abandoned” Eeyore — whimsical, slow, utterly loyal, a “special nobody” — who gives Oe’s digressions their hopefulness (“I’ve been optimistic all along!” Eeyore exclaims one night). This is a story about human responsibility to those who are at once threatened and indomitable, and in that it succeeds.