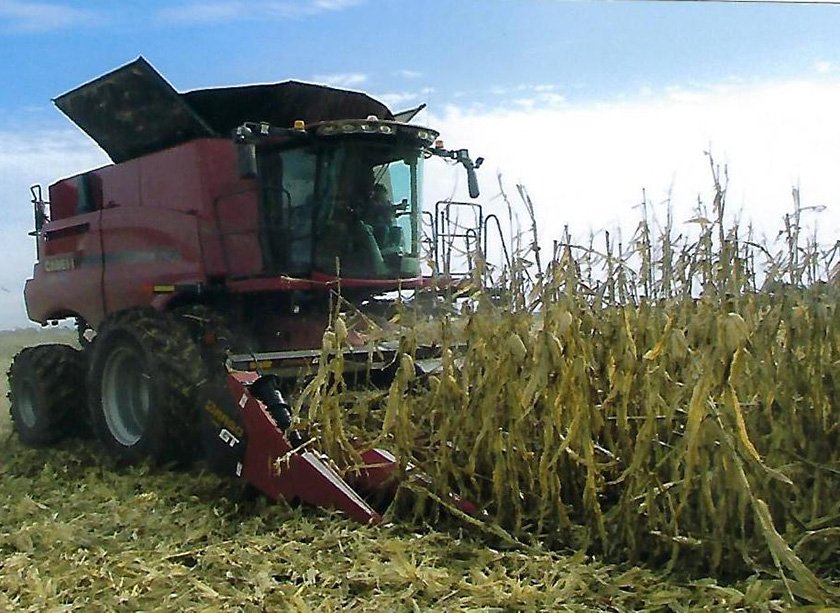 very August, a box arrives on my front porch, marked “fragile,” although there’s nothing breakable inside. Just perishable. A dozen ears of corn from Iowa. I’m always hesitant to open the box: my frugal father sends his annual offering snail mail, as in the slowest and cheapest route, in ninety-degree heat. So, some of the ears have rotted by the time they arrive.

This year is an exception. Opening the box, I catch a rancid whiff, but the ears are intact, lying in their nude-colored husks that I quickly remove to find perfect ears of white and pale yellow kernels. I boil an ear for dinner that night, slathering it with butter and a pinch of salt and pepper. It’s delicious.

Although the corn doesn’t come from my dad’s fields, symbolically, it’s a token of his — our —patrimony. My father grew up on a farm in Northwest Iowa, and then went into small-scale agricultural business (instead of becoming the opera singer that he’d also dreamed about). He bought his first farm in 1972, when my brother was ten months old. He then bought a farm every few years until the got to 23 farms. Mapped out in acreages, the total amount of land is roughly the size of Margarita Island in Venezuela.

The only thing more annoying than my parents to my adolescent self was the idea of their death.

But until earlier this summer, my brother and I — both in non-farming professions — knew little about the farms. With my father in his eighties, we decided that it was time that we knew something about what my parents vaguely referred to as “the estate.”

The first time my parents said “estate” was the summer after my first year of college. We went out to dinner at a bountiful Italian restaurant, and as my brother dove for the bread sticks, I felt a pit in my stomach: why did they always decide to have heavy conversations at mealtime? I wondered. After all, an “estate” implied their absence, and the only thing more annoying than my parents to my adolescent self was the idea of their death.

I listened cautiously, finally understanding why my parents had told me not to bother applying for financial aid for college: I wouldn’t get it. Our assets, because of the farms, were far too great. Just how great, I still had no idea. We had been raised middle-to-upper-middle-class, unaware of the wealth that the farms generated, but that conversation tipped me off.

About a decade after that conversation, my mom died, and the “estate” again came up. I asked my dad to take me to see a few farms, and we went for a tour on a cold Sunday afternoon in November. The sky was overcast, and dead stalks littered the ground. Mid-way through, we stopped at a convenience store for hot chocolate. Sipping the sweetness, I told my dad about my passion for poetry, and poets inspired by farming, like Donald Hall and Linda Pastan. For these poets, farming and poetry seemed analogous: poems were like seeds that took root and then had lives of their own.

“Maybe someday I will retire on one of your farms, and write poems!” I blurted out, glancing over at my father, who had an odd, if recognizable look on his face—characterized by both a nervous switch and a twinkle in his eye. As if trying to suppress the joy that nonetheless squeezed out of him. “Yaw,” he said, lingering on the word long enough for me to preserve the moment in my mind as a delicate promise to myself sealed by his silent, stoic endorsement.

An echo of that conversation returned on our official tour of all the farms this summer, when my dad pointed out the best farm on which to build a dwelling. Taking mental note, I also wrote down the histories and details of each farm: the one with a windmill, the one with Amish neighbors, the one where my dad’s farming mentor Floyd lived. An iconic farmer, Floyd was a round man who wore OshKosh B’gosh bib overalls and chewed hay in the corner of his mouth. He apparently once told my father that of his two children, I was the farmer.

“I wonder why he thought that,” I asked my dad on the tour. “He was intuitive,” he said, adding, “But he didn’t always get it right.” I blushed. While it was probably too late for me to become a farmer, I hoped to acquire a small fraction of my father’s knowledge about the farms—enough to make sure that they would live on.

It was a day in which time both stood still and sped up — mindful of the quiet rite of passage taking place.

The day of the tour passed unhurriedly. We stopped for sodas at vending machines in near ghost towns, and passed around a bag of Fritos. It was a day in which time both stood still and sped up — mindful of the quiet rite of passage taking place.

That night, my belated birthday dinner at an Italian restaurant felt a little funereal, and my dad came down with a cold the next day. I let some days pass before asking my dad more questions about how he had amassed and maintained the farms. He slid into techno-speak as if he was talking into a dictaphone rather than an heiress. Then he returned to his mantra of frugality, suggesting that the key to his fortune was simply that he knew how to hold onto it.

“I’m sure it’s a lot more complicated than that,” I said. Yet an image came to mind that reflected my dad’s words: During last fall’s final harvest, I rode on combine run by my dad’s farmer, Dave. As the combine’s enormous claws scooped up the ears of corn by the thousands, even millions, I saw my dad trailing behind on foot, picking up the leftover ears, one by one. Then he carried them by the armful back to the car, to be included in the count.