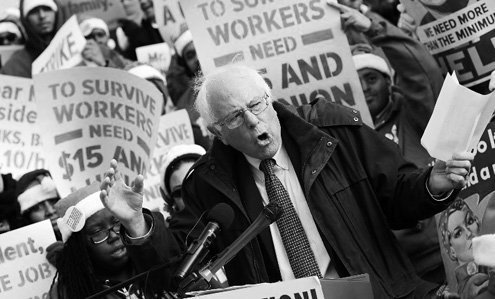 ommuting to work on a Vespa means passing the countless decorative and utilitarian fountains that represent the backbone of Rome’s ancient water infrastructure. It’s easy to take Rome’s water riches for granted — until, that is, you read about drought or water rationing elsewhere.

Maybe that’s why the Flint, Michigan water scandal hit me so hard. In 2014, Flint switched from Lake Huron to the Flint River as a water source. Short-cut thinking led to widespread lead contamination. Like the 2008 financial crisis and the Volkswagen’s emissions scandal, the Flint story is long and politically complex. In less than two years it’s created a host of villains and damaged lives.

But this column isn’t about water, at least not as such. It’s about the misguided side of American culture that tends to lionize money-seekers at the expense of those whose concept of fulfilling work is that which contributes to the greater good.

It’s also about the presidential candidacy of Vermont Sen. Bernie Sanders. Loved or loathed, his campaign has centered on breaking up too-big-to-fail banks, overhauling campaign finance laws, and raising taxes on the hyper-rich. Sanders wants to dismantle the American money alter by repairing what he sees as distorted priorities.

His proposed Rebuild America Act, which would pump massive investment into deteriorating national infrastructure, is part of a larger philosophy that seeks to change the definition of wealth. In Sanders vision, having a good job with a decent standard of living should trump (yes) being flush with cash.

What does this have to do with water? The Flint scandal followed a similar one in Washington, D.C. In 2002, drinking water in many D.C. homes tested positive for lead at levels equal to the amount found in hazardous waste. Both cities were trying to control costs without sufficient understanding of public health implications.

In D.C., local water officials chose cheaper chloramines over other more costly options for reducing the presence of byproducts of chlorine disinfection. In April 2014, Flint switched from buying treated water from Detroit’s Lake Huron, as it had done since 1967, to treating its own water from the nearby Flint River. The idea was to save as much as $5 million. Taken alone, neither decision was strictly speaking incorrect.

But in both cities, the newly treated water interacted with old and soldered pipes, dissolving and releasing lead into customers’ homes. Until the D.C. incident, the phenomenon of lead interaction after a change in water characteristics was little known. The Washington scandal not only traumatized the city but also generated considerable publicity and discussion about lead contamination, including widely published research that highlighting the critical importance of testing out new water treatment programs before putting them into effect. That didn’t happen in Flint.

I spoke with Dr. Alexa Obolensky, a water chemistry consultant to U.S. drinking water utilities, who told me the D.C. scandal sent ripple effects throughout the water industry. That city officials, regulators and professional advisors a decade later would reduce or even bypass testing before a significant water source change now seemed unfathomable. But again, that’s what happened in Flint.

So far, between six and 12,000 people in and around Flint have tested positive for unhealthy lead levels. Many local children have been diagnosed with lead-related toxic deficiencies. A local outbreak of Legionnaires’ disease is also being blamed on the tainted water.

In both Washington and Flint, local officials who made the key decisions were quick to conceal post-change testing results and to downplay the seriousness of their own findings.

The field of water treatment is packed with experts, many of whom are fiercely dedicated to protecting public health. There’s also plenty of legislation, including the Safe Drinking Water Act, which sets water quality standards, and the enforcement-oriented Environmental Protection Agency. Infrastructure is also monitored. On the face of it, there’s no lack of either regulation or enforcement.

What’s missing is something more basic, and more human. The average treatment plant operator, a figure responsible for overseeing the water supply of thousands if not millions of people, typically earns about $35,000 a year. Here’s a question for you, a social one as much as a financial one: Is a hedge fund manager who makes 4,000 times that actually worth more?

We tend to consider the operation of bridges, highways, water systems and electrical grids in abstract terms. We grouse at potholes, dilapidated train stations and monthly utility bills. Yet the public works systems that bring us light, heat, transportation, telecommunications and security are fundamentally inter-related and essential to our ability to lead productive lives. When the lights go out, it affects everyone. That’s why who you have in power plants, and who wants to work in them, matters.

The Flint crisis is only the most recent headline-grabbing suggestion that American national infrastructure is badly in need of attention. Attention means extraordinary funding and improved management, which in turn means a heavy dose of political courage.

But back to Sanders, whose emphasis on income and wealth inequality and campaign finance reform reflects the need for an upheaval in political thought and voter commitment. By suggesting higher investment taxes, he’s placing a priority on the value of both work and education. It’s a campaign staked on personal principles.

It also a campaign that can help us remember what we easily forget, namely that infrastructure refers to the structure from the ground up. And good structure means employing people who care about and are aware of the consequences of their actions. Whether plant operators, teachers or nurses, awareness needs to be valued as a skill. That’s the foundation Sanders is trying to fix. That’s his mission, from the ground up.