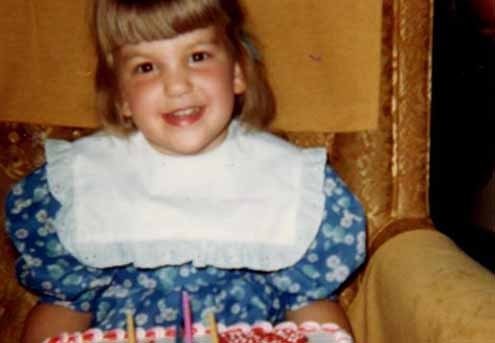 The author on her fourth birthday in a dress her mother made.
S

unday was Mother’s Day, which has about as much meaning to me as Groundhog Day. It’s not that I don’t value mothers — I think they are the keepers of the planet, and I appreciate my own as more time passes since she died. But having neither a mother, nor being a mother, it’s an unremarkable day for me.

Still, the gush of gestures, both sentimental and beautiful, can’t help but make me think about what I most miss about my mother — her voice, her laughter, her bullshit detector, her nurturing wisdom. This reminiscing is usually followed by the troubling realization that I won’t ever see her again.

But I’m convinced our parents plant little seeds of themselves in us to endure, and a small part of the legacy my mother left me with is the importance of clothing.

My mother didn’t tell me to count sheep when I couldn’t sleep. She told me to plan my outfits for the week. I’d lie there, wide-eyed, matching chinos to my favorite Esprit sweaters, deciding which day I would wear a dress — until I finally fell asleep. My planning later turned into practice, and before bedtime I’d lay out my outfit for the following day.

A few year ago, while living in Washington D.C., I came across a slim book at a table outside a bookstore called something like “What I Was Wearing When…” The author described what she was wearing at memorable points in her life. I was smitten. I happily did the same. My first-ever school day outfit was a pink and white gingham blouse with a pink skirt and most likely, saddle shoes. On my first day of school in first grade I wore a navy and white cotton belted dress that my mother made. She’d stitched a white, cursive K on my lapel. My mother made most of my clothes until I was about 10.

For one of my first piano recitals, she made me velvet knickers and a cream-colored blouse with a matching velvet bow, and more matching bows for my hair, which was curled in ringlets like young Mozart’s.

She also liked making us matching mother and daughter outfits, like the dresses made from turquoise fabric with a print of little colored balloons. Hers was a more fitted dress, and mine flowed pinafore-style, in front of me.

We wore them once for Sunday Mass and I remember feeling slightly embarrassed that we were dressed the same. Even at eight, I was already self-aware and becoming “snippy,” as my father said. I was eager to distinguish myself.

Fast-forward to fifth grade, when my new best friend Rene and I bought matching leopard-print hair bows at Claire’s Boutique in the downtown mall. It was my entrée into my preteen years. We recently exchanged a Facebook throwback memory about those bows —and the boys in the class chimed in to remind us we wore them almost every day.

My mother dressed me through junior high and high school, mostly via Land’s End, L.L. Bean and J. Crew. I loved the smell and feel of fresh catalogues in the mail.

At 19, I discovered Italy and Italian clothes. My first bikini, which I bought at a little boutique at Rome’s Piazza Bologna, was navy blue with a red strawberry print. I discovered heels and short skirts and the ethos that you could look sexy without looking cheap.

But back at university in America, I let my mother continue to dress me, which meant Talbot’s clothing that was a couple of decades too old for me. When I moved to Italy after college, my Italian boyfriend told me I dressed like a nun. On a trip to his ancestral home in Calabria, we wandered into a boutique where I bought skin-tight lavender cords that the salesclerk helped me match to a plum-colored sheer shirt over a black camisole. “You’re finally getting it,” my boyfriend said.

My Italian sensibilities morphed into the minimalist, fine-quality aesthetic that I associate with Italian craftsmanship and taste. The morning my mother died, I was wearing a Cornwall blue, Italian merino wool sweater that hugged my body and reminded me of my Italian brethren a world away.

My brother woke me to the news that she’d fallen unconscious. Sitting on my bed, with splotchy eyes, he said three words I’ll never forget: “She’s still here.” Then, “She can’t talk, but she can hear us.”

I dressed quickly, in the blue sweater, jeans, and a pair of silver jellies I’d bought a few days before. On the inside of the shoes was heart stitching. I’d quickly gone home to show them to my mom. “Do you like my shoes, Mommy?” I hadn’t called her that in years, but that word came spontaneously, deep and familiar as my own name. She opened her eyes long enough to delight in my shoes — and then, some 48 hours later, she did what she’d told me to do many years before: She fell asleep. One last time.