A pound of flesh 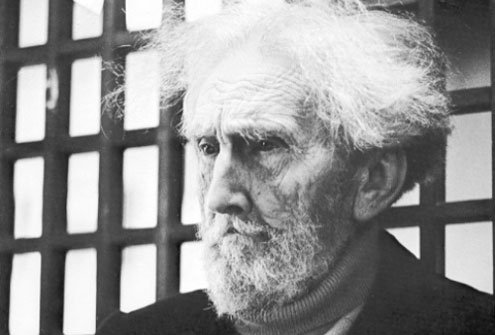 Pound photographed in Burano a year before his November 1972 death.
O

A committed Modernist who helped launch the careers of T.S. Eliot and James Joyce, the Idaho-born Pound had lived in Rapallo, near Venice, since 1924. As a radical intellectual, Pound was disillusioned by World War I and blamed the ensuing inter-war depression on shifty global economics, in particular on the practice of usury, loans at high interest rates (“Yaaas, I knew that was what the war was about: gold, usury and monopoly.”)

Living in Benito Mussolini’s Italy, Pound embraced Fascism as a remedy for world economic woes and social decay. Mussolini fascinated Pound, so much so that American poet came to believe that il Duce might actually assist avant-garde artists. Against the advice of his novelist friend Ernest Hemingway, Pound arranged to meet Mussolini at Rome’s Palazzo Venezia, giving the dictator a section from what would become his epic modernist poem, “The Cantos.” “Ma questo è divertente” (“How amusing”), replied Mussolini, a quip Pound took as great compliment.

Pound’s political convictions and his penchant for conspiracy theories produced a loathing of Franklin D. Roosevelt and Winston Churchill, as well as a xenophobic hatred of Jews. “I believe in Fascism,” he told his friend, reporter Reynolds Packard. “And I want to defend it. I don’t see why Fascism is contrary to American philosophy. I have nothing against the United States, quite contrary. I consider myself a hundred percent American and a patriot. I am only against Roosevelt and the Jews who influence him.”

In the fall of 1940 Pound began bi-weekly broadcasts as part of Radio Rome’s “American hour.” He wrote the rambling scripts in Rapallo before pre-recording them in batches Rome. The State Department repeatedly implored him to stop, but he agreed only after the December 1941 bombing of Pearl Harbor. “I stand with my country right or wrong. I will never speak over the airwaves again.”

But it was too late. The State Department had already restricted his passport. Attempting to board the last train of American diplomats leaving Italy, he was barred by a U.S. Embassy official.

Stuck in Rapallo, Pound was left with a ménage à trois that included his wife, Dorothy Shakespeare, and his longtime mistress, violinist Olga Rudge, forced by wartime circumstance to live in the Pound family home. In dire need of the $18 he earned for each Radio Rome broadcasts, Pound returned to broadcasting on Jan. 29, 1942, notwithstanding the state of war that existed between the U.S. and Italy, a grievous error Pound would later acknowledge. In July 1943, he was indicted for treason in absentia.

In May 1945, after Mussolini’s fall, Pound was escorted from his home by two armed Italian partisans and eventually jailed by the U.S. Counter Intelligence Corps (CIC) in Genoa. Though interrogated for two days, his three CIC weeks were endurable. He was fed and allowed to continue with his work, a translation of Confucius. Composed and confident, he even asked to write to President Harry Truman offering to help negotiate peace with Japan. The request, seen as a delusional appeal, was promptly denied.

With Pound at the CIC, agent from J. Edgar Hoover FBI entered his Rapallo apartment, seizing letters, pens, manuscripts, articles, and even Pound’s typewriter. (Pound would fill 14 FBI files in all). In addition to the 120 radio transmissions monitored by the FCC, Pound’s financial investments were also tracked. Before the U.S. joined the war, Pound had invested his small savings into the equivalent of Italian war bonds.

On May 26, 1945, without warning, Pound was handcuffed to a MP and delivered by jeep to the US Army’s Disciplinary Training Center (DTC) north of Pisa, a camp for U.S. military personnel who had committed serious criminal offenses. Pound, the only civilian DTC inmate, was isolated in a so-called “death cell,” a six-foot by six-foot outdoor steel cage exposed to the elements and flooded by spotlights at night.

In the “gorilla cage,” as Pound called it, he got one meal a day, slept on the concrete floor, and was forbidden to write or possess any book but the Bible. Guards were barred from speaking to him. The demoralizing punishment was later rationalized as a deterrent for Fascists hoping to free him.

But Pound suffered a nervous breakdown, including what doctors called “temporary periods of confusion.” He was transferred to medical compound tent where a handful of humane privileges were restored. At night, he used a typewriter in the medical dispensary to begin writing “The Pisan Cantos,” which would become the sixth book of “The Cantos.”

In 1949, “The Pisan Cantos” won the Library of Congress’ esteemed Bollingen Prize, with the citation applauding the poetry’s brilliance. That a Fascist sympathizer had received the award produced immediate outrage. In an article titled “Treason’s Strange Fruit,” Pulitzer Prize-winning poet Robert Hillyer eviscerated “The Pisan Cantos” as “the vehicle of contempt for America, Fascism, anti-Semitism, and … [a] ruthless mockery of our Christian war dead.”

News of the award reached Pound in his ward at St. Elizabeth’s, the psychiatric hospital in Washington D.C. where he’d been confined on the grounds of insanity, the alternative to a trial for treason. “No comment from the bughouse” was Pound’s typically irreverent response, as if to led credence to Time Magazine‘s 1933 uncanny assessment of his character: “A cat that walks by himself, tenaciously unhousebroken and very unsafe for children.”

His friends, Eliot still among them, repeatedly insisted Pound’s views had been manipulated and misrepresented. But when Pound was finally released from St. Elizabeth’s in 1958, he immediately returned to Italy. Disembarking in Naples, he gave photographers the Fascist salute.