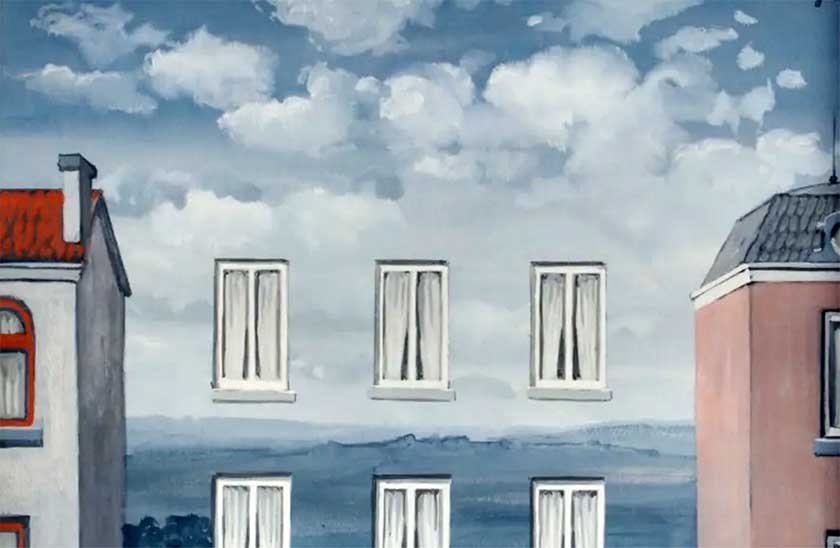 Going down... to make a point. Painting by Magritte.
A

fairly young, fairly attractive, fairly intelligent woman jumped from the top floor of a luxury hotel in Warsaw. It was midnight and before she took the final dive, she made sure the streets were empty. She did not want to hurt any innocents below. Is there any innocence in this world? She thought there was, that purity and goodness did exist in some people; she simply had not been lucky enough to find them. No matter; she wasn’t taking any chances.

She was vain. She fantasized about ending the nonsense called life fashionably, in the most “Vogue” magazine of ways. After the act, the photographers could come straight away and get to work on her. She dieted for a long time. She hardly ate a thing, living on cranberry juice and sparkling water.

Whatever she looked like, the photographers would note the still perfect make up, the pale skin wrapped in a vintage fur coat, the equestrian riding boots — or stilettos. She couldn’t make up her mind. And the clock was ticking down.

She couldn’t stretch the moment out too long. Her act was time sensitive.

Not only that, she was determined to die at a specific time — on her birthday.

She dieted for a long time. She hardly ate a thing, living on cranberry juice and sparkling water.

The weather conditions seemed ideal, a perfect copy of the day she was born, and to her that was appropriate. She’d been brought into this world on a cold winter day just after Christmas. The day was so cold and snowy people could hardly walk, or so she’d been told. Très chic.

It had been a real winter day with real snow, and climate change had made such days a rarity. But this was one of them.

Such days were rare, so this was her last chance.

One detail before she opened the window was surprising. In this last moment of darkness and despair she started giggling. In considering the velocity of her personal tailspin, she asked herself a question any eight-year-old could probably have answered. She had never paid much attention to the dynamics of physics. In fact, she could barely understand the basics of height and velocity. She was always more of an artistic creature. Abstraction was her thing.

It seemed natural to her that a heavy object would fall faster than a lighter one. Let’s assume for a moment that all this is being played out in a lab. It’s cold and the air is thin. There are no obstacles between the open window and the pavement below. How much faster would she fall if she weighed 10 kilos more or 10 kilos less?

But she wasn’t in a lab and she couldn’t be bothered to look it up. Would this be the last thing on her mind before she ended her existence?

But the thought passed as quickly as it came. The idea of finding the answer soon faded.

She took yet another Xanax and washed it down with a small bottle of champagne. She hated its bitter taste but she knew the time had come to summon her courage.  The final step was close at hand.

She bribed the hotel porter to lift the windowsill, which normally allowed only a small opening for ventilation. She paid him enough that he set aside his fear of being fired.

The cold flew in and she had to act swiftly. But one last thought passed through her mind.

Human beings, she thought to herself, are truly the most pitiful of animals. They gladly set aside the reality that sooner or later their lives will end. To do this, they’ve created ample distractions. Some watch TV all day, others find someone to love until the end of their days, a not-so-small number play video games. The smarter ones use the less smart as fertilizer to make it to the top.

In this last moment of darkness and despair she started giggling.

But what is the “top” and what does it matter? Who cares? There is no such thing as judgment.

She wanted one thing and one thing only — attention.  Attention so she could pass on a message.

She got what she wanted. Her story made the front page of the world’s largest newspapers.

She left an envelope addressed to the detective assigned to investigate her room. In it was a letter in which she asked him to insert a quote into her “Cause of Death” file.  The quote had been lodged in her mind for months:

“Indeed, it is becoming ever more obvious that it is not famine, not earthquakes, not microbes, not cancer but man himself who is man’s greatest danger to man, for the simple reason that there is no adequate protection against psychic epidemics, which are infinitely more devastating than the worst of natural catastrophes.”

It is a quote she found in Carl Gustav Jung’s “The Symbolic Life: Miscellaneous Writings,” a compilation of Jung’s many postwar papers and essays.

As a result of her act, and the printing of her letter with the quote, people who had stopped reading and thinking for themselves began anew. The book sells out all over the world and requires reissuing. If only for a moment, her sacrifice was worth it.