A Place in the Country 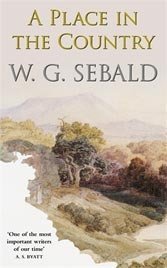 By W.G. Sebald, translated from the German by Jo Catling

German author W.G. Sebald died in 2001 after a decade of astonishing novel-cum-travelogues that remain peerless in the annals of contemporary literature. Here, resurrected from a 1998 work, are six provocative essays that pay homage to authors he esteemed, including Johann Pete Hebel, Jean-Jacques Rousseau, Eduard Mörike, and Robert Walser.

What distinguishes Sebald’s criticism is its intellectual holism. He behaves like a botanist discerning the minutiae of shrubbery. He wants to know how artists fit into the texture of their century, or failed to. And in what made their nostalgia tick. To this task he brings his idiosyncratic voice — a kind of promenade of the mind that can freeze time in its tracks. “I have learned,” he writes in the forward, “how it is essential to gaze far beneath the surface,” and it is that incomparable gazing that prevails over all else.

From him, we learn in passing that a 19th-century consul of then-independent Texas “had a villa built for himself among the Stuttgart vineyards”; that Mörike was a product of a matriarchal order “to which, at heart, all men long to return;” that Walser’s writing ideal was “to overcome the force of gravity,” constructing sentences that “scuttle away under our gaze like millipedes” (Sebald out-Walsering Walser) and then “dissolve upon reading.”

The authors he tends toward are pupils of melancholy, men capable of writing at length on tiny scraps of paper (his beloved Walser, mentally ruined, ultimately wrote in rune-like micro-script). Sebald also tries defining the palsy that is writing, whose “awful tenacity” so enthralls its practitioners that they become its slaves. “The art of writing,” he says of Gottfried Keller, “is the attempt to contain the teeming black scrawl which everywhere threatens to gain the upper hand,” and of Rousseau: “Of all individuals afflicted by the disease of thought, the writer is perhaps the most incurable.”

Yet this “vice” is of course one with which Sebald himself is also plagued, except that here he plays the role of country doctor. His words are a cushion for famed and less famed artistic outliers whose essence, he believes, was obliterated by self-loathing or by a society ill-suited to entertain their impossible romantic longings. As always with Sebald, the volume is rich in plates and period-piece drawings, further proof of the scientist at work.