A piece of colored fabric 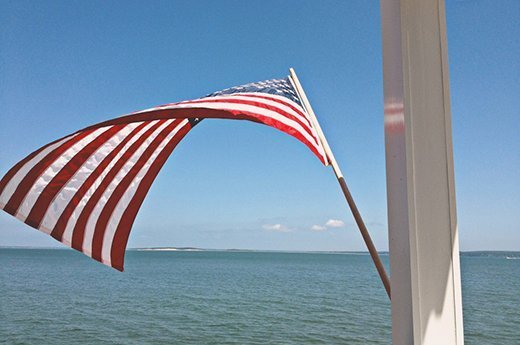 Flags are a lot about place, and belonging.
W

hy, my new friend Paige asked, were American flags hanging out and about in abundance on a quiet summer day? “I don’t get it.”

We were driving on the North Fork of Long Island as part of a day-trip out of New York City. Known for it’s vineyards, oysters and quaint fishing villages, the drive also gave me a chance to get to get to know Paige.

She’d grown up up in Cape Town, South Africa, but moved with her family to Melbourne as an adolescent. Her life story seemed to spill out over the miles. There had been stints in Montreal, and travels through Europe. Since she’d been all over, I wondered how she identified herself nationally and culturally.

“I have the South African flag tattooed on my back,” she admitted. “But New York is where I’d like to stay. I really love the diversity of people and ideas.”

She had a work visa for now and was hoping to find an American guy to marry. When she wasn’t looking at the scenery she was checking her dating app for matches and was busy with chats.

Driving east on Highway 25, we passed Jamesport and Mattituck. In each town, the stars and stripes flew on lampposts and banners. Sheet-sized flags hung at the Dairy Queen, Joe’s Auto Parts and the Everlasting Funeral Home. It could have been Independence Day, but it wasn’t.

When I was growing up, flags were placed more strategically, usually to note government offices or schools. One flew at the post office, the Veterans of Foreign Wars building and the fire station. Like signs, they helped you find important places. We pledged allegiance in the classroom, then forgot about it. But not anymore.

Although I tried to answer Paige’s question, the reply seemed more complex than mere patriotism. As I drove, the question nagged at me. If it is patriotism, what is it about the country that we’re proud of?

We fly the flag so that no matter where we go in this big wide world, we always know, by looking at it, where we come from and who we are.

Washington, D.C. now hosts hundreds of rallies, protests and demonstrations annually, many more than in previous years. All this movement has begun to strain the National Park Service budget. Providing security for the tens of thousands that descend on the capital is taking its toll. It seems at times we cherish free speech just to ensure we can shout each other down.

Ironically, the one fixture in the protests is flying the American flag.

Is patriotism the act of putting up with divergent views? With a population of different colors, creeds and lifestyles, maybe the commitment to American ideals requires constant symbolic reinforcement. Americans often have little in common except this tiny piece of colored fabric with white stars and parallel bars.

With it, we claim ourselves to a commonality with those we disagree with and even despise. It’s a bit of glue that makes disparate people able to live, mostly at peace, together.

As Paige and I pulled into our final destination at Greenport, the sun was high and boats docked in the harbor. We found stools at a clam shack and ordered local IPA and a dozen oysters. With the ocean breeze, it was a quintessential American summer outing.

“Paige,” I said. “I finally figured it out how to answer your question. We fly the flag so that no matter where we go in this big wide world, we always know, by looking at it, where we come from and who we are. And for people like you, who’ve lived all over, sometimes it’s good to be reminded.” She laughed and we kicked back a drink of ale.

Flag or no flag, one thing was certain: on this summer day there was no place we’d rather be.