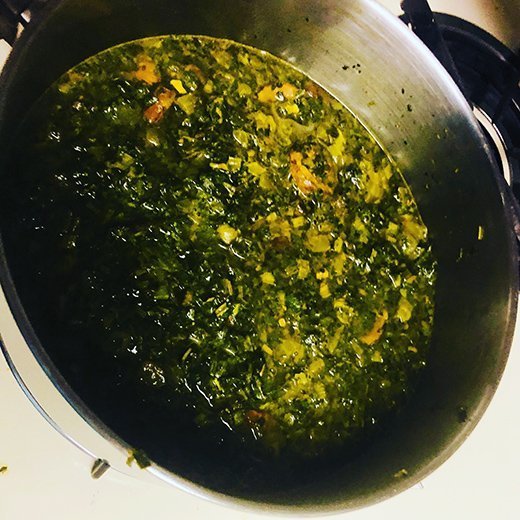 y grandmother’s kitchen always had something going on — a pot of water boiling, a stew simmering, fresh herbs drying on the counter. At the very least, there was a fragrant kettle of tea and a samovar with steam undercover, waiting to be released. Throughout her life, she was in charge of cooking for her husband, as well as her children and sometimes other relatives. The kitchen was her domain.

My domain has been outside the kitchen, working in an office, as a lawyer, or a classroom, teaching. When I have a few free hours, one of my favorite things to do is to attempt cooking. Lately nostalgia has taken over my cooking experiments. Like many people who live in Los Angeles, I like Persian food. But for me this is deeply rooted: It’s the food I ate growing up around my mom’s extended family. Until I was about thirteen, my mother’s three siblings and their families, and my grandparents, were all living in the Los Angeles area. Every Friday evening for the Sabbath meal, my cousins and I would gather at my grandparents’ table for rice, stews, and soup — all of it cooked by my grandmother.

Recently, for the first time, I made one of the stews my grandmother used to make. It’s called gormeh sabzi, or ‘gourmet” sabzi for non-Farsi speakers who enjoy puns. One of my less linguistically inclined friends calls it ‘the green stew.’ It is green due to its many vegetables and herbs. My grandfather used to go to the market and bring home these fresh herbs. My grandmother would chop them up, knowing intuitively how much she needed to use without using any measurements. In my stew, I used pre-chopped and dehydrated greens. I did manage to chop an onion on my own, which brought labor and tears.

My grandmother had a huge supply of brown dried limes to put in her stew. She once told me she’d brought them over in 1979 when leaving Iran. I’m not sure dried limes would be at the top of my list of things to take with me when escaping a Revolution… But anyway, I’d always thought they were lemons. I discovered, on the Internet, that the stew does indeed call for limes. I was able to get some at the local Persian market. Nothing else could make the flavor just right.

Throughout her life, she was in charge of cooking for her husband, as well as her children and sometimes other relatives.

Our stews weren’t exactly the same. My grandmother used meat in her recipe. My stew was vegetarian, although I used mushrooms to make it ‘meatier.’ My grandmother used white rice, and I used brown. Our family follows Jewish dietary laws so she could not have made the rice with butter, since meat and milk are never mixed in kosher cooking. In place of meat, I used a little bit of butter, and the rice came out rich with flavor.

That afternoon while cooking, my kitchen was filled with an aroma that was none other than the essence of my grandmother, and by extension all of my foremothers. Since my mother and grandparents have all passed away, my link to my Persian-Jewish heritage is mostly made of memories. But when I smelled the stew and rice it was as if my ancestors were present again — giving their blessings for the path that I am on, which is very different than their own.

My grandmother had to stop her education at fifteen to get engaged and married. My mother defied the odds and went to college first before getting married in her twenties. I went to both college and law school, and I live as a professional. I’m not married, and I’m living in a society in which a woman doesn’t have to have a husband, and she certainly doesn’t have to make her husband dinner. I’m living in a very different world than the one my ancestors left behind. But cooking Persian food recalls family traditions that have endured.

My late grandmother would have been 92 this year. Though she’s not here, she left behind a precious culinary legacy that includes my own version of her stew. It’s a gift I both treasure and share.