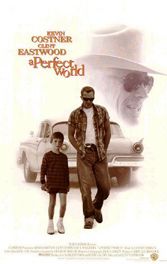 Clint Eastwood’s superb sleeper got short shrift because of the weight placed on Kevin Costner to produced outsized characters. Instead, Costner is Robert “Butch” Haynes, an escaped convict who in the early 60s kidnaps seven-year-old Philip “Buzz” Perry (T.J. Lowther) and hauls him across Texas as a Texas Ranger gives chase (Eastwood as Red Garnett) and a criminologist tries forecasting his next move (Laura Dern as Sally Gerber). Both Butch and Buzz come from broken, fatherless homes (Butch’s mother was a prostitute, Buzz’s is a Jehovah’s Witness) and strike up a friendship. It’s not Stockholm Syndrome, but a primitive camaraderie between a boy and a boy-gone-wrong galvanized by the woes of an imperfect, menacing world. Butch is a dreamer; Buzz listens.

There’s every reason to believe that all this will end very badly, but not before Costner delivers a genuinely worthy performance that bookends shyness and rage. Eastwood, both as Garnett and as a director, fathoms goodness in badness the way few can, perhaps because he was asked to play unwashed gunslingers and irredeemable castoffs for so long.