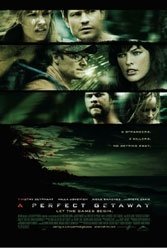 Author of the moody, paranormal thrillers “Pitch Black” and “Below,” writer-director David Twohy has the B-movie dead-to-rights yet again in this parody-spiked comedy-horror flick about a honeymooning couple that suspects its Hawaii jungle-trail companions of having committing a Honolulu double homicide. Nerdy screenwriter Cliff (Steve Zahn) and newlywed ditz Cydney (Milla Jovovich) hook up with jungle-trail walking Nick (Timothy Olyphant) and Gina (Kiele Sanchez), one an Iraqi vet, the other a former Savannah supermarket butcher.

The casual banter turns sinister as wide-eyed Cliff and Cyndey get it in their odd little heads that they’re in the creepy company of the Honolulu killers. From there, Twohy rolls out many the genre’s typical tools: misdirection, black humor, a separate set of suspects, and an endearing quantity of red herrings. But it’s his role-reversal kicker that spreads both icing and silliness.

Sanchez in particular carries off the nutty closing with enough tongue-and-cheek panache to make this an entertaining, spoof-driven 90 minutes. Twohy even delivers a near-priceless jab at mobile service providers, an added treat for those who see natural born killers but can’t get a signal.