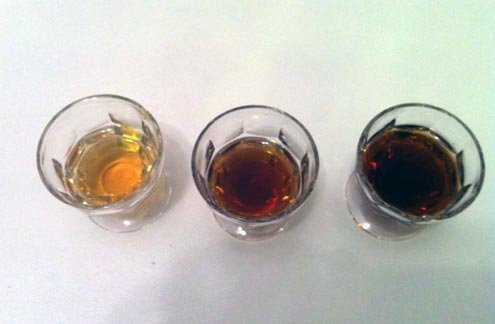 y first encounter with Vin Santo came on unusually warm winter day in Pisa. Roberto and Marina invited me to spend a Sunday afternoon their family. First, we drove out to take a walk by the sea. Around two, we sat down at their big dining room table for a long and delicious meal.

At the end, Roberto poured Vin Santo and Marina passed around a plate of Tuscan cantucci, the hard, almond biscotti that are traditionally paired with Vin Santo. I dipped my cantucci in the sweet wine and sipped the last few drops from my tiny glass.

It was a perfect ending to the afternoon.

Roberto explained that there are two kinds of Vin Santo (literally “saintly” or “holy” wine). On the table was the white version, which is made with malvasia and trebbiano grapes. The red version, predominately made with sangiovese grapes, is known as Occhio di Pernice (“Eye of the Partridge”). Traditionally, the grapes are made to dry on racks for three-six months. After pressing, the “must” (unfermented grape juice) goes directly into caratelli (small chestnut barrels) to ferment and age.

Vin Santo barrels are then lodged in the attic, not the cellar, where the temperatures range from summer swelter to bitter winter cold, for three to 10 years. The only way to keep the small barrels from exploding is to leave breathing space inside. As a result, Vin Santo is always slightly “oxidized” or “madeirized” (in the spirit of Madeira, which was stored in the hulls of ships and heated in tropical locations and cooled in northern ones). The oxidization gives Vin Santo a syrupy feel with complex nutty and dried fruit flavors (raisins, apricots and figs) and a slightly caramelized taste.

The wine, which originated near Florence, is still only made in Tuscany. Anecdotes about its birth vary. One story says a 14th-century friar used the wine left over from Mass to cure the sick, hence the holiness. Another says that a Greek Orthodox patriarch visiting Florence for an ecumenical council exclaimed Ma questo e xanthos! (“This is xanthos!”), mistaking it for a blonde Greek wine. The Florentines thought he he’d said santo, and the name stuck. A third suggests the wine was traditionally made around Easter and became known locally as Vin Santo.

The research made me eager to taste more. Avigonesi Vin Santo di Montepulciano DOC or Occhio Di Pernice DOC are top-of-the-line but expensive (€125 for a 375 ml bottle). In Milan, I joined my friend Louise in trying four high quality but less costly bottles in the €20-35 price range.

After we’d tasted them, she decided to play a sort of parlor game. She took the wines to a dinner party with Italian friends, each of them very sure of their wine expertise. After the meal they tasted the wines and rated them poorly, writing comments like “oxidized” or “like sherry” or bocciato (failed). We had to chuckle. She didn’t want to be the ugly American who told them that Vin Santo is supposed to taste that way.

Color varied. Capezzana is very blonde, while San Giusto and Fontodi are amber colored. Occhio di Pernice is dark red. The nutty taste, a result of oxidization, was prevalent in all the wines.

When buying Vin Santo or Occhio di Pernice be sure to check the labels for DOC Chianti, Chianti Classico, DOC Colli Dell’Etruria Centrale, or DOC Montepulciano. There’s plenty of “industrial” wine that’s labeled Vin Santo but not made in the traditional way, with brandy or other liquor added.

Serve Vin Santo in small quantities and in small glass, either alone or with cantucci biscuits. Occhio di Pernice should be served in a very small quantities but in a large glass (it’s not for dipping). The wine is best served at cellar temperature 15-16 degrees, not room temperature.