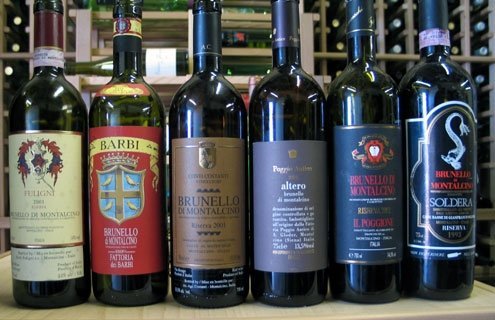 It took decades for Brunello to gain producers and a following.
I

t took a century for Brunello of Montalcino to make a deep mark on the wine scene, but the breakthrough, when it came, had a lasting effect. Called “a wine of beauty and intensity that is impossible to match” by experts, today’s best Brunellos hold their own against their fine French brethren.

Last month, I chronicled Brunello’s journey, beginning in the late 19th century when Clemente Santi isolated the Sangiovese grape clone that would set Montalcino on its path to notoriety. Clemente was followed by Ferruccio Biondi Santi, his son Tancredi, and Tancredi’s son Franco. Painstakingly, the family coaxed a rare wine from Tuscan obscurity into the limelight and helped influenced a new generation of Brunello makers.

Success, like a good vintage, can move at a snail’s pace, and the development of Brunello took time. By 1975 the number of Brunello producers had expanded from a handful to 25 estates. Sticking to the Biondi Santi model, wine lovers such as Gaetano Mastrojanni began buying modest parcels of land near Montalcino and assigning plots to future Brunello vines. The undertaking was both expensive and time-consuming, with little guarantee of a payoff.

Bearing in mind the time that passes from first planting to third leaf (the year the vines are large enough to produce grapes suitable for a first vintage) plus the years required for aging and bottle-fining, Brunello’s producers needed a healthy dose of “The Three P’s”: Passion, Patience and a fairly substantial Portafoglio.

Producers with limited funds couldn’t afford to turn over large portions of their vineyards to the wine. By the mid-1970s only about 800,000 bottles of Brunello were produced annually — and even those against strong odds.

Late that decade the wine still had its skeptics. Even Montalcino’s future big hitters weren’t entirely convinced. Brothers John and Henry Mariani (Castello Banfi) bought 1,800 hectares in southwest Montalcino and politicked hard at a city board meeting to convince area farmers that they should plant Moscadello instead of Sangiovese. Their goal was to produce Moscadello frizzante, a sweet slightly fizzy white wine.

But producers such as Piero Talenti, who at the time headed Il Poggione, and Franco Biondi Santi, joined forced to oppose the Moscadello proposal. They championed Brunello and worked to establish stringent criteria for vineyard management and vinification. Only in this way, they believed, could Montalcino’s Brunello producers make a wine that would improve during the years of lengthy refinement (and confinement) in 30-hectoliter casks.

By 1977, one hectare of Montalcino land, including buildings and vineyards, was worth roughly 3.5 million lire, about double 1960s prices. That’s equal to €11,730 today. Money, including the price of land, breeds interest. Like California gold miners with stars in their eyes, small farmers began to realize that there was gold in them ‘thar grapes.

By the 1980s, riding the coattails of the pioneering families before them, estates began planting Sangiovese exclusively. Others sold their land to outsiders who began arriving in Montalcino specifically to invest in winemaking.

By dedicating a goodly portion of their harvested grapes to Brunello production, these smaller producers and their bumper crop of Brunellos dramatically increased the region’s wine market. By the time their wines reached the buying public, the Montalcino Renaissance had just begun.

— This is the second in a three-part series. Part three, “Brunello: Renaissance, Dark Ages, Risorgimento.”