A note from the late Krissy perf. 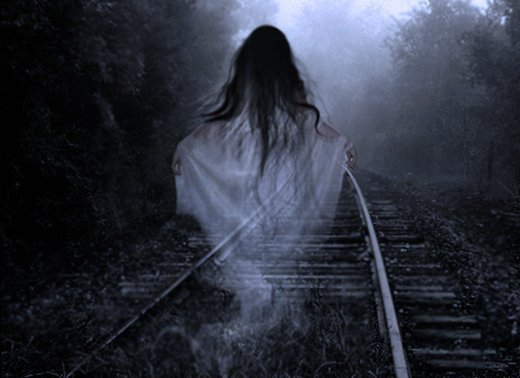 Krissy prides herself in getting around….
H

ey guys! My name is Krissy, and I’d like to welcome you to The Lodge, this wooden cabin you’ve just bought. You’re probably wondering who I am and why the real estate agency didn’t tell you you’d be sharing the place. I have a simple answer that will cover all your concerns — I’m not a person, I’m a ghost.

But, like, not any ghost. I’m a millennial ghost.

You see, I was killed in a tragic accident like, um, maybe five weeks ago, Idk.

Anyway, I was walking to town, looking for wi-fi reception so I could post a story on Instagram to make my boyfriend Trent jealous. But then, an out-of-control snowmobile ran me over. So random, right?!

Why am I even writing you this, right? Well, first off, I didn’t. Trent wrote it for me. But more importantly, I thought we should set up some ground rules — I mean, if we’re going to be sharing this crib. Now, I’m a fun, cool ghost, okay? So like, I won’t be haunting you or anything like that. Which is why I’m asking you to not haunt me. That means paying attention to a few personal details. Just because I’m dead doesn’t mean I didn’t know how to live the right way.

Please use sheets with a thread count in the high triple, if not quadruple, digits. That’s like pretty basic roommate stuff.

I’m not a person, I’m a ghost. But, like, not any ghost. I’m a millennial ghost.

I will say Egyptian cotton was my personal fave, but like, idk, maybe you’re a pima cotton kind of family. That’s cool too. Just make it organic, okay?

Also, let’s talk food. It must sound crazy that I care about what you eat, cause like, I don’t eat! But when I died I was at my optimal fitness level — so many hot yoga classes, like for real — so I’ll be like super-hot forever. But now, as an ectoplasm, I’ll be having to pass through you. So no rude surprises, please.

It’s, like, the 21st century, so all of you should be vegan by now. I hope that’s not going to be a problem between us. I mean, I already miss avocado toast so much it’s like crazy. Please stick to a clean diet made up of local foods that come in cute brown paper bags (so retro!). It’s so icky to have to pass through someone who still, like, eats steak. I don’t want all the modern ghosts judging me, which they totally will.

And I feel like this next part should be obvious, but absolutely no gluten. I haven’t had gluten since Coachella in 2015, and (without meaning to be, like, harsh), you will not be my downfall. I also recommend you take some supplements like charcoal or spirulina cause, like, it’s so scary how dirty certain people’s inner sanctum is. Like, girl! Get it together!

It’s, like, the 21st century, so all of you should be vegan by now.

Now let’s address decor. I’m so the “mom” of my friend group. So I really love, love, love the idea of having ecto-friends over. But, like, they judge, judge, judge, which could put me, and you guys, in a bad light. So let’s make a team effort to not have any tacky things like antler lamps, or boring paintings of boars. Get something cool, like a photo of Kate Moss, or even like something by Jeff Koons. That would go such a long way with my friends. Think of it like this — if you’d want to Instagram it, then it’s totally perf.

So yeah, that’s me! As a good roommate, let me throw some things out there for you to know. My boyfriend Trent might come around. He’s human and he’s still so not over me. Which is like super cute and everything, but it’s also so, like, annoying sometimes because I met this other super dope ghost named Chad who was in a frat at University of Miami (he died falling on his head during a keg stand) and, like, he’s so funny. He’ll do dumb stuff like mess up my hair. He’s like so stupid. And, like, I totally meant to break up with Trent because I saw him with another girl, but then I died, and now it’s like, ugh, what do I do? Anyway, he comes around and gets drunk and trashes the place every weekend, but it’s chill. I swear I’ll break up with him soon but Chad is so jealous it’s super-hot.

Final things — I will torment you if I see you’re not using responsibly sourced shellfish cause like, the oceans, you guys. Think!

Oh, and if you hear screams in the house from time to time you don’t have to worry. It’s just me upset about my following-to-followed ratio on social media. Which reminds me — please tag me in all your photos at the house. Trent made me an account after I died (how can I break up with him, he’s such a sweetie), and I swear if Iris gets a million followers before me, it’ll be like dying all over again. Also, like, if you guys could up your social media game, that would be like so amazing.

But yeah guys, I’m so excited! This will be so fun!