À nos amours (To Our Loves) 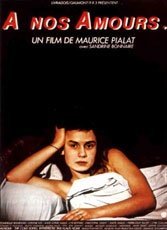 It also introduced the world to inimitable Sandrine Bonnaire. Bonnaire’s flawed but unusual good looks work for capricious Suzanne, a 16-year-old Parisienne only happy when she’s making love. Though she reveres boyfriend Luc (Cyr Boitard) she cheats on him at summer camp with an insensitive American (her cynical post-sex wisecrack: “You’re welcome. It’s free.”). Suzanne’s meaningless act signals telltale existential crisis. That she ignores the risks of playing fast and loose with her body does not make her a slut. “Slut” isn’t even in Pialat’s vocabulary. Better to think of it as Suzanne’s pleasurable diversion from a dysfunctional family.

Her father (stately and enigmatic Pialat himself) has abandoned the family for another woman. This drives mother, already a crackpot, into abusive hysterics over Suzanne’s frequent late-night trysts. When Suzanne disappears and returns at dawn she’s met with slaps from older brother Robert (Dominique Besnehard). A pudgy, middling writer, Robert thinks his titular role as the new “man of the house” means body-guarding mother from reality at all costs — sister-beating included. Suzanne struggles to repair relations and flees for boarding school. But senseless abuse never fails to pick up where it left off.

Suzanne has little choice but to marry. For a woman, this was (and may still be) the only suitable social framework in which feminine sexuality can exist. It chokes desire and silences it into monogamy. Suzanne’s adulterous father shows her empathy when the rest of the family can’t: “You were not meant to love,” he says, “You were meant to be loved.”

The film’s most teenage moment is also its most elegant. Suzanne, drenched in Paris rain, sulks to the sound of Klaus Nomi’s chilling aria, “The Cold Song.” Winner of France’s 1984 César award for Best Film.