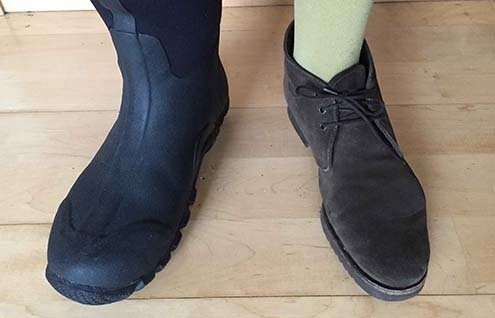 n the United States, the winter and Christmas seasons officially begin the day after Thanksgiving, about a week earlier than I’d been used to when I lived in Milan. There, winter officially began on Dec. 7, the feast of Milan’s patron saint, St. Ambrose.

If Pearl Harbor’s Dec. 7th commemoration hadn’t brought me around to the date’s Italian significance, I wouldn’t have noticed the difference. That’s because I was too busy making up for my failure to understand the fundamental difference between winter in Italy and New Hampshire.

In Italy, winter is a vacation destination. In New Hampshire, where I live now, it’s a lifestyle.

In Italy, winter is something that happens elsewhere. It’s a place you can choose to go to as an escape or for a change of air. When you’ve made up your mind where to go, preparation is as easy as collecting your things, packing a car, and making for the autostrada.

An Italian winter means mountains, which are friendly and cute. Villages look like postcards. Elegant stores selling stylish Italian versions of the costumes from the “Sound of Music.” The Italian winter is fun. It’s all about skiing and sledding, followed by hearty food, aromatic wine and pastry in cozy restaurants where waitresses wear jolly dirndls. For the Italian winter you can wear fur and cashmere or skiwear with a miracle marriage of form and function. And winter is finite; when you’ve had enough, you can go “down valley” where spring is already on the way.

New Hampshire is another story. There was no excuse for being so behind in my preparations. The warnings were there. Flyers advertising functional, if ugly, footwear began appearing in my mailbox in September. When I purchased a new wood stove in August, appointments for installation were already booked until mid-October. To get wood, I had to wait for an appointment in the busy logger’s schedule. When it finally came, I raced to stack and shelter it before snow came.

“The first snow” was a moving-target of a deadline. It could come tomorrow or in two months. Yet its arrival dictated everything. There was no escape from the ticking clock.

In Italy, I relied on the grocery store’s cheery pyramids of panettone to remind me of the season’s change. In my New Hampshire grocery store, the bags of salt for snowy sidewalks stacked next to the Halloween pumpkins rudely warned me of winter’s scourge. A visit to the tire store for a blown tire awakened me to the necessity of snow tires —and the now-scarce appointments for their installation. Ankle-deep leaves that blew daily into my front door called for removal by snow’s deadline. Potholes told me if I didn’t grade my driveway soon, they’d soon freeze into mini skating rinks. And if I didn’t find someone to plow that driveway, I’d be stuck. When the nights cooled, and I began using my new wood stove, I realized that if I didn’t collect it immediately, the handy kindling strewn across my lawn would be buried under the white stuff. Just buying dog food taunted my tardiness, when it dawned on me that I’d need to train the dog to wear salt-proof booties or get used to having cream put on his paws.

I was lucky that fall was unusually warm — and long. Thanksgiving came and went and Christmas music was now on the radio and still no snow. I finally found a man to take care of the leaves. In the nick of time; he had planned to put his tools away for the winter the day I reached him. The ground froze, but the driveway guy, who also said he could handle plow when the time came, said there were a few days before it was too hard to fix my puddles. Two days after he repaired the driveway, I awoke to the first snow.

It was as magical as I remembered it from childhood. However nice the winter vacations in Italy, they’d never provided this enchantment, the muted chatter of squirrels and birds and the newly-bright dawn light.

I could lie in bed and enjoy. Outside I heard the snowplow arrive. My wood was stacked and dry. My snow tires were on.

And even things I had not gotten done were not so dire. It turns out there’s lots of kindling in the deadwood still on trees. Nicer-looking snow boots were available online.

I still haven’t gotten the dog trained to booties and cream. But there’s still time: I’ve got all of January, February, March and probably April to do that.

Because I can’t go “down valley” when the first-snow magic wears off.