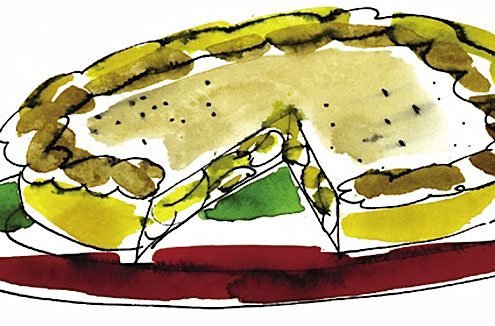 What did I use to make the crust? Where did I get the apples?
E

ating dinner at Angela’s place is like taking a lesson in Italian geography. In a voice that calls to mind the low coo-cooing of a turtle dove, Angela quietly enunciates the origins and qualities of each ingredient, even the most basic.

The disk-shaped pasta is from the Puglia region, where Angela grew up. The pachino tomatoes are from the Campania region and are not to be confused with other cherry tomatoes. The eggplant is from Sicily, of course, and the strawberry grapes are from Nemi, outside of Rome.

Whether listed in soft tones or belted out across a dozen table settings, the verbal cataloging of one’s meal is part of the pleasure of eating in Italy. Italians live on some of the most pampered soil in the world and produce more than the usual share of internationally-prized specialties. Winter brings seasonal additions to the list of must-haves, like chestnuts, tarocco oranges and white asparagus.

But the flavors aren’t what they used to be, says Rosina, who was born in Emilia-Romagna a full generation ahead of Angela. Industrialized farming and mass distribution give the supermarket shelves a veneer of plenty that she could never have imagined as a child, but nothing is authentic anymore. Not unless it comes from your own farm or from someone you know.

Eating at Rosina’s is like taking a step back in time.

Rosina cracks an egg on the edge of the kitchen table and drops it into a well of flour to make fresh pasta. Towards the end of World War II, says Rosina’s husband, when all the rabbits had been hunted and the chestnuts eaten and the berry bushes picked clean, there were days when there was nothing to eat at all. But there were better times, when they had the best ingredients, full of flavor and the scent of herbs. Now they never go hungry, but the food doesn’t taste as good. And it’s a new generation, he says. The people who know how to make the traditional foods at home are dying off. Not enough young people have learned the old ways.

Still, my appreciative (though imperfect) palate finds living here akin to residing in culinary paradise. If Italian-born friends sometimes curl their lips at ingredients or methods that don’t quite meet their standards, it is precisely because they enjoy an enviable luxury — they were raised on high expectations that still can be met much of the time. Italians know their country is famous for its food and I have seen some faces shimmer with pride at the thought.

In an anecdote that is typical of the kind often gleefully recounted at the dinner table, Angela tells of driving through the eastern United States and coming across a restaurant with the massive sculpture of an artichoke above its door. Roadside kitsch, I would have said — but Angela saw the mega artichoke as a beacon of gastronomic hope. Weary of table after table of overcooked vegetables and tasteless salads, she took the sculpture as a sign that her luck was about to change. The folks inside would know a thing or two about greens, she thought. But she was wrong, she says, eliciting a series of chuckles.

When I tell stories about eating in America, I talk about roasting fresh corn on the cob at a barbecue in Missouri, about the texture of fresh cranberries simmered with orange juice and sugar in a Connecticut kitchen, about avocados grown in the hills of southern California. I talk about black beans and pumpkin pie and picking fresh apples. But I am not particularly ambitious in the kitchen and I have always been a bit intimidated by the discerning palates and noses of my Italian pals.

Early in my Italian sojourn, I decided to avoid offering meals that could be classified in any way as Italian. I wasn’t sure that I would always select the best ingredients or prepare them with the right touch. With the accent of a native English speaker and the face of a West Indian, I surmised that “exotic” menus would work best for me.

My family’s Jamaican cooking provided a good starting point, although Angela herself found the contrast between sweet and salty flavors a bit disconcerting the first time around. Then, realizing that just about anything that wasn’t Italian could be considered exotic, I branched out into the eclectic arena of American standards.

If it is different enough, and you make it well, they will eat it. But they will still expect you to run down the list of ingredients.

Angela was about to return to the United States for the first time since eating at the mega-artichoke restaurant and she’d invited some friends over for dinner. I had decided that her sendoff would be an American classic — a good, old-fashioned apple pie. As I cut and served the pie, several curious noses formed a circle around me. This lumpy concoction, shrouded in a steaming golden crust and oozing amber juices from the slits in the top, bore little resemblance to its delicate Italian cousin, whose thin apple slices were typically arranged in ordered rows and crisscrossed by an ivory-toned, lattice-style crust.

What did I use to make the crust? Where did I get the apples? There was a lot of cinnamon. And what else? Spelling out the ingredients as bidden, I thought to myself that it was such a short, simple list. Yet I had wanted to please the Italian sensibility with this most American of treats. The forks began to explore. The noses and palates made their assessment. The crostata di mele was declared buonissima.

Did everyone in America, someone asked, serve the hot pie with cold ice cream?

Italy is, after all, a place where the best dishes often exalt simple combinations that take you back to the earth. And where, as in much of the world, sharing a meal is the single most important ingredient. On the surface, my lowly apple pie was an exotic guest at a Roman dinner table, but in the tasting — and the telling — it was quintessentially Italian.