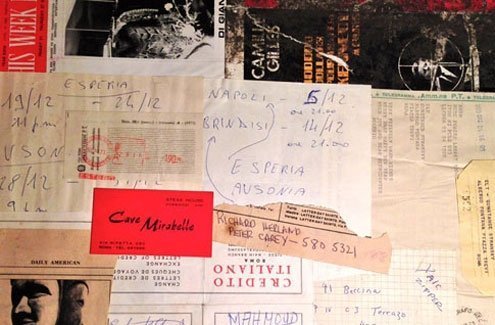 Bits and pieces that form a spiritual quest.
O

ne Christmas in the 1980s, when I was around 14 or 15 and living in London, I received a Sherlock Holmes-style, wool deerstalker hat as a gift. I was never sure why. Had Santa been short of ideas? Was it trendy to dress like a Baker Street detective? Had my family noticed something about me that suggested parallels with Sherlock?

But it was a good gift, strange yet good.

The Sherlock hat comes to mind as I sleuth among my mother’s belongings as part of a personal project I’ve mentioned before. My mother’s life fascinates me. Her absence has shaped my perspective on most everything. She came to Rome in the early 1970s and spent days sketching and writing. It’s also where she died of pneumonia later in the decade.

From inside one of many artwork-filled boxes came a large black portfolio with her Rome-era collages. Some were as large as an unfolded map of a country, others more manageable, A4-sized. Studying them with my daughter, I found one collage that contained a fragment of this magazine’s forerunner, The Rome Daily American.

Not content with the idea of coincidence (“Rarely is the universe so lazy,” Holmes would say), I decided to examine the collage more carefully. With a magnifying glass, if you will.

To do so, I had to hold it with both hands. It’s about the size of a tabloid newspaper but not everything reads top to bottom. For example, to read a telegram from someone named Rogerio in Lisbon that arrived on Christmas Eve 1973 you need to rotate the collage. There’s what looks like a book jacket for “400,000 Dollars pour abattre Kennedy a Paris” (“$400,000 to Shoot Down Kennedy in Paris”), a French journalist’s story of plot to kill JFK in Paris released in 1973. A business card for the long-gone Cave Mirabelle steak house on Rome’s Via Ripetta is in the middle.

There are also scribbles and arrows that detail an itinerary to (or from?) Ausonia (a Lazio coastal town) or Brindisi. There are bank names and addresses, post office stamps, and official seals. A hotel calling card has its name scratched out and “Mahmoud” written over it. The disparate events that define this collage — the choices my mother made of which objects to include — seem to tell a story. Or at least reveal a tenor of life. A tone. Reds, whites, beiges and black harmonize. What seems at first like chaos reveals a careful balance.

And however you look at it — from a distance or up close — the story draws you in and reflects back on itself.

The article in the fragment from the Daily American, for example, shows a photo of a Buddha monument in Vientiane, Laos (the Vietnam War was raging at the time). The caption explains that miniature symbols of wealth and material success (model helicopters, watches, cars) have been left under the giant statue in deference to the greater importance of the spirit. The collage is a testament to a similar contrast, and to non-material items. The assembled scraps tell a story. The collage has a spiritual dimension.

Yet physical elements abound. At the center of the collage are the names Peter Herland and Peter Carey. There’s a phone number next to Carey’s name written in Anglo-Saxon penmanship that begins with 580, which at the time corresponded to Trastevere (and still does). I Google the names. Herland was a 1970s director. Carey is a well-known Australian writer who would have been her age. I look him up on Google. He’s also on Facebook. I decide to do something crazy and write to him. I tell him I found his name and a number on a collage. I send him a photo of it and ask if he knew her. He replies. At the time he was living in London not Rome. He doesn’t remember her and wishes he could help. I thank him, and pursue my path. It seems like a dead end. Ironically, his latest book is titled “Amnesia.”

Who were the two men? And who was Rogerio of the Christmas telegram? What about Mahmoud and all the other notes and names? My search for her identity is blocked by her search for her own identity.

In a sign of self-reflective drollery, my mother has placed her own signed passport photo in the lower left quadrant. This is where the story of the collage begins and ends, with the passport, stamps, and journeys. In her final years she traveled to Beirut, Istanbul, Damascus. The collage itself is a journey involving interpretation, an ongoing journey through place and time that is destined to continue.