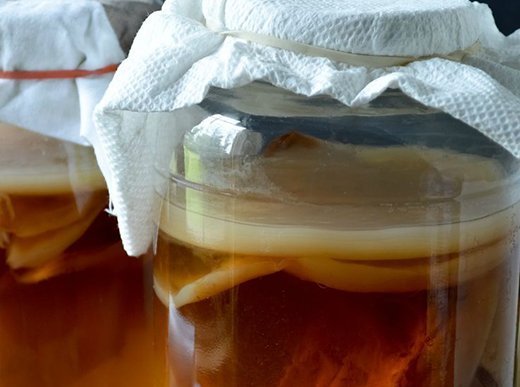 A Depression-era cola alternative included a mushroom and fizz.
A

few months ago, while shopping for tonic water, I came across a new bottled beverage, or so it seemed. Stacked up next to coconut and vitamin water (both “healthy” liquid staples), it stood out for its slick Indian-inspired packaging. It looked ready-made for the trendy yoga set.

But when I read the label, my eyes got big. As soon as I read the word Kombucha, I started laughing. Out of nowhere, this “new” beverage had summoned up a slice of my past.

Once, when I was seven years old, I’d opened the refrigerator to find a big glass jar filled with dark liquid. Floating inside was a gelatinous mushroom that seemed soft and mucous-like.

I knew the floating goo was called a “mother,” a yeast much like mother of vinegar. I also knew it turned plain tea with sugar into the fizzy tart-apple drink that we’d have all summer. But no one else I knew drank kombucha. They had real Coke and root beer. Not our house, where cola was too expensive and ingenuity would have to suffice. With a live “mother” inside the jar, we could make as much as we wanted and feel the strange thrill of abundance.

I suspect my Depression-era mother had learned about kombucha from the then Ohio-based magazine “Mother Earth News,” which we received regularly. Starting in 1970, the counterculture publication promoted self-sufficiency and holistic living. It was the do-it-yourself guide for the ecology minded and those seeking lifestyle alternatives. My mother was always looking for ways to feed her kids with whatever she had on hand, which never seemed like much.

I suspect my Depression-era mother had learned about kombucha from the counterculture “Mother Earth News” magazine, which we received regularly.

I can’t say that I loved the taste, but I drank it because it was cold and our only alternative to water. My mother claimed it would keep us healthy. I looked at it more simply. If it didn’t hurt us, it might just do us some good.

Her faith in the alternative movement was pervasive. In my fantasies, I recall thinking that one day someone would actually sell this as a drink. It seemed far fetched, though, even to my child-mind. It was just too weird.

Shortly after the kombucha phase, my mother moved on to blue-green algae. Spirulina became the next big thing, a bacteria filled with protein, minerals and B-vitamins. She’d thaw a can of frozen orange juice, add water, and scoop in the green powder and stir. The algae turned the juice from yellow to lumpy green. The consistency was thick, fuzzy and tasted like citrus moss. I’m not sure it was a step up from kombucha, but at least it provided variety.

Thinking about all this I decided to take a closer look at a bottle in the cold case of my convenience store. It had its distinctive brownness and went by the name Kombucha Synergy. The price took me aback. At $3 a bottle it’s now more expensive than a brand name cola. The cheap alternative days of my childhood are gone. It is a drink of privilege.

If my mother was still alive, she would shake her head and remark, “What’s this world coming to?” And I’d have no answer. I can’t say I have one myself. What I do know is that her efforts to feed and take care of me lives on. She was shaped by a can-do spirit in which you made the best of what you had. It never seemed to me like a life of privilege. But now, looking at things differently, perhaps in fact it was.