A most tragic fairy tale 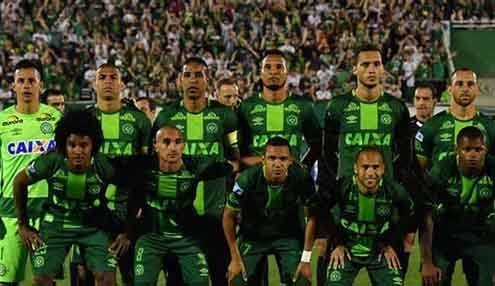 Brazil's Chapecoense football team in a 2016 group shot.
A

ir crashes and football have a uniquely painful relationship. Tragedy has twice befallen Europe’s brightest and strongest teams since the end of World War II. In 1949, a plane crash wiped out Torino FC’s “Grande Torino” squad. A decade later, in 1958, eight members of the legendary Manchester United team known as “Busby Babes” — coached by manager Matt Busby — perished in a Munich runway crash. Until their ill-fated flights, both teams had dominated their leagues as well as their nations’ collective imagination.

Manchester United has since become one of the world’s biggest club teams with the Munich tragedy remaining a central reference point in team history. At the same time, the tragedy also helped generate a groundswell of support that ultimately helped lift the club to greater heights.

The Turin crash was more devastating. A commercial flight carrying the club — Italy’s best —from Lisbon to Turin slammed into the Superga basilica on a hill outside the fogged-in city, killing all 31 people aboard. Torino FC has since had bursts of success but never matched the glory years in which it was considered superior to all-conquering city rivals Juventus. The Superga disaster retains spiritual meaning in the everyday narrative of the club and its supporters.

South America has its own dark legacy. In 1969, The Strongest, among Bolivia’s oldest club teams, lost 20 players to a commercial crash near hilly Viloco. Allianza Lima, Peru’s most decorated club, perished in a 1987 charter flight disaster.

On Nov. 28 came the turn of Brazilian club Chapecoense. A charter flight carrying players and staff to the first leg of the team’s Copa Sudamericana final date with Colombia’s Atlético Nacional crashed outside of Medellin. Three players survived, but 19 did not. In all, 71 people died.

The event was heavily covered internationally and dominated social media. The way a fairytale-in-the-making had been transformed into a calamity made the story all the more compelling.

Unlike the Torino and Manchester United teams, Chapecoense — founded in 1973 — was more of a Cinderella story. Chapecoense, “Chape” to its fans graduated to the country’s top tier national league, Serie A, in 2014 and was all but unknown outside Brazil.

But top tier play made the team eligible to compete for the 18-team Copa Sudamericana. Beginning in August, Chapacoense acquired a taste for upsets, defeating Argentine giants Independiente and San Lorenzo to earn an improbable berth in the home-and-away final. Now, the team is far more famous than it would have been by winning the trophy on the field against Atlético.

But about the future of the modestly funded club? What happens after the mourning wears off and the international spotlight shifts elsewhere? Manchester United and Torino were elite teams in financially affluent countries.

Despite futebol‘s central role in Brazilian society, the financial and administrative health of the sport has deteriorated badly over the last five years. Though Brazil has the world’s ninth largest economy, the country is in steep decline.

Brazilian clubs have historically relied heavily on selling promising stars to Europe’s rich clubs to cultivate revenue. But with the local economy drying up and the number of moneyed foreign leagues — in places like Ukraine and China — increasing, Brazilian youngsters are leaving earlier and for less money. With a poorer product on display, Serie A attendance has shriveled to less than 16,000 per game, 5,000 less than the U.S. Major League Soccer average.

Chapecoense is essentially a provincial club that represents the city of Chapecó, population 209,000. It is located inland in the westernmost part of the state of Santa Caterina, more than 600 kilometers from the well-known coastal resort of Florianopolis.

Given Brazil’s immense geography, football remains in most respects a provincial pursuit. The national league was created in 1959 thanks to advances in civil aviation. Clubs previously competed in statewide competitions, and still do so alongside national matches. Chape are five-time winners of the Campeonato Catarinense (they won again in 2016), the annual tournament comprised of Santa Caterina’s clubs.

Despite the team’s regional success and rapid continental ascent, this season’s home games averaged a mere 7,000 fans at their 22,000-capacity Arena Conda. The club counted an official membership base of 9,000 on the eve of a continental final. Chape has never had a tradition of grooming (let alone possessing) the kind of talent that can command significant overseas revenues. The legendary 2016 team will be remembered on the field as a hard-working unit of well-coached veterans.

While typical revenue streams may offer scant hope of rebuilding, there is some hope for the future. The South American football federation CONMEBOL, acting on a request from Atlético Nacional, officially awarded the Copa Sudamericana title to Chape, guaranteeing about $5 million through a combination of prize money and a promise of participation in continental competition next season.

While watching a recent marquee Premier League matchup — Leicester City vs. Manchester City — I saw the message #ForçaChape scroll across the field-side electronic board at Leicester’s King Power stadium. As remote as Chapecó may be geographically, football can make the world incredibly small.

Players with millions of social media followers have issued supportive messages. Many have gone further, offering financial donations and pledges to join the team as it rebuilds.

Everyday people have also contributed, with reports that club membership rose by 6,000 in the week following the catastrophe, with another 50,000 applications still to be processed. Much more than mere “likes” or retweets, these are financial commitments of several hundred dollars apiece over the next year.

While it’s easy to be cynical about the outpouring of support — clubs, players, and sponsors certainly have their own PR agendas — it is undeniable that technological tools now exist to ensure that more chapters are written in Chapecoense’s remarkable story.