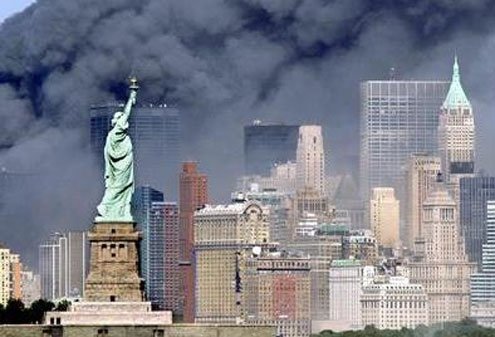 Damn, now I have to see all these images again...
I

spent most of August 2001 shopping for a Brooklyn apartment. I finally settled on one that had a full view of lower Manhattan. The trees were small then, and from the living room I could see the tall towers of the World Trade Center. When the sale closed in December, the buildings were gone.

This is the one piece of personal history I usually share when it comes to 9/11. Where I was when it happened, how I felt, why I stayed in the city, and all the other possible themes don’t enter conversation, especially not with anyone who wasn’t in New York. Those of us who were here need only to share a knowing look to feel understood.

I learned of the killing of Osama Bin Laden not on the Sunday night when President Barack Obama made his announcement. I went to sleep early and slept soundly. In the morning, as I read the New York Times, slow tears ran down my face. I cannot say if it was joy, relief or simple disbelief. One thing I did not feel was patriotism.

Turning on the TV news, I saw that on the previous night, spontaneous parties broke out near the White House and Ground Zero. People who looked to be in their late teens or early 20s were waving the Stars and Stripes, singing the National Anthem and praising America. Those celebrants, probably 8-to-14 years old when it happened, seemed to be telling the world how we felt about the news. We were all overjoyed, jubilant and proud to be Americans. The rhetoric soared. Yet among the people I knew, and throughout the city, there was something quite different.

On the streets in my neighborhood, there were no flags, no hi-fives, no “we got ’em at last,” On the subway commuting into Manhattan, no one was dressed in red, white and blue; there was no feeling of glee or elation.

I expected to find an office abuzz with talk of Bin Laden, the capture, reflections on 2001, perhaps chatter about the partying from the night before. All was strangely quiet.

I received no phone calls from friends to discuss collective relief, or from family who had reached out to me on that day to see if I was all right. It was as if no news had broken at all.

We all simply went on with our day.

My experience was in sharp contrast to what was portrayed on American television. I thought I must have missed something. As the day progressed, there was still no change.

After work, I sat down with my neighbor Hal. He was an emotional wreck after 9/11, far more than others. He had grown up in Manhattan. His life story was here.

We shared a meal, talked about recent movies and the new restaurants in the neighborhood.

Finally I asked him. “Hal, I’m curious. How did you feel when you heard the news of Bin Laden?”

He slouched slightly in his chair then spoke.

“The first thing I thought was, ‘Damn, now I have to see all these images again.’ Then, I tried to forget about it. “

We were both quiet. It was similar elsewhere in the city. It was not solemn silence, of the kind you sense at funerals or among strangers who have nothing in common. More like the natural reverence of watching a sunset, knowing the day is forever gone.