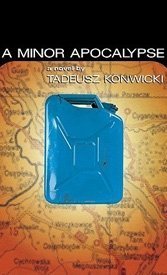 By Tadeusz Konwicki, translated from the Polish by Richard Lourie

It is 1979 in Warsaw. Poland and the Soviet Union are cozier than ever. Dissidence feels hackneyed. Communism is bankrupt but Western capitalism sounds no better. Enter a jaded but unnamed narrator (“an anonymous writer, an unknown man”) who is asked by two morose resistance buddies to set himself alight in front of the city’s culture ministry during a visit by the Soviet premier. Konwicki’s novel is a scathing, satirical and amorally theatrical x-ray of the narrator’s Odysseus-like end-game navigation through the morass that is Warsaw, and by extension Poland — if not the world. “I have been given a mandate by the foolish and the wise, the cunning and the naive, by hustlers and saints,” says the citizen narrator as he ponders his fate. Just is foolish and who is wise on an “out of joint” planet is never entirely clear.

Though Russia-hating is a Polish sport that under communism crested into a strange amalgam of rage and obsequiousness, a deeper self-loathing creeps into Konwicki’s rich prose. The narrator’s plunge “into the freezing abyss” is more than just an objection to Soviet overlords. To annihilate is at least to affirm. To go up in smoke might serve to “break the lethargy,” to briefly distract from the banality that permeates life under an oppressive regime, if not all regimes. Toward the end, the narrator meets Jan, among the few elders he respects. Jan is vomit-ruined and transcendent, the kind of talking stain Konwicki prizes. Jan rues the “infamy of nations and individuals”; history, he says, “is repulsive, foolish, stupid. Only when seen at a distance is it tragic, beautiful, majestic.”

Jan’s rant helps formulate Konwicki’s larger damnation. Self-immolation is a “minor” apocalypse because the “major” one has a more universal destiny in which no one gets out alive.

The novel was written after the quashing of anti-Soviet unrest to which Poland responded through martial law. Soon after came the Solidarity labor union and the Gorbachev 1980s, culminating in the eventual collapse of the Soviet system. But the social mildew Konwicki rips apart, dog to bone, concerns human vanity and self-interest as much as any domineering ideology. Konwicki, also respected filmmaker, died in 2015 at age 88.