A matter of stardust 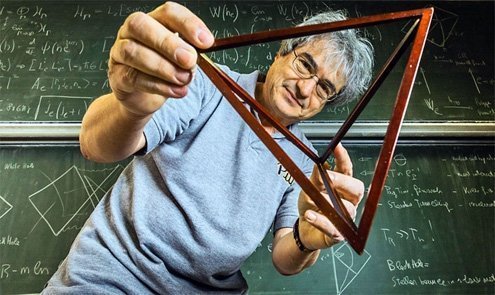 Rovelli's book was first published in Italian as "Sette brevi lezioni di fisica." He works with the quantum gravity research group of the Centre de Physique Théorique in Marseille, France.
I

talian theoretical physicist Carlo Rovelli’s mind-bending, “Seven Brief Lessons on Physics” is a slim volume that brilliantly and intelligibly compresses the 20th-century’s revolution in physics. Here is a book that poignantly suggests just how vast universe it is, one that still awaits our understanding.

For the non-scientist, the highly specialized developments in physics can seem as abstract as they are abstruse. To make them reader-friendly, Rovelli adopts an uncannily winning mix of “lesson “styles. His sentences are short and concise. His language is highly charged and visual. He uses question-and-answer summaries to help explain infinite complexity. While this book isn’t intended as a Physics 101 primer, Rovelli’s ability to translate great discoveries into descriptive language evokes an enormous personal clarity of vision. It allows ground-zero readers to grasp the larger picture. No small feat.

“The Most Beautiful of Theories,” chapter one, examines Albert Einstein’s long theoretical progress toward his General Theory of Relativity. The chapter pounds home Einstein’s ability to reveal a simpler but deeper order to the universe. Rovelli’s explanation of Einstein sees the veils shadowing comprehension fall away.

Rovelli’s image-laden presentation of the relativity theory seems at times to surpass all language barriers, a talent he shares — if in different form — with Einstein’s contemporary, the Irish writer James Joyce. Is this an odd conjunction? Wait and see.

But Rovelli, like Joyce, has the gift of eluding the habitual language of scientific exposition, coining fresh phrases or finding words that spark intuitive recognition.

Einstein pursued and refined his vision for decades, ultimately breaking with previous theory in a dramatic way. Later theoretical discussions of Einstein’s theories did little to “explain” them to the lay reader.

Now, thanks to Rovelli lucid language, Einstein’s view of space and time come alive. Both space and time, he writes, are in constant curvature and in continuous motion. Imagine a ride inside hectic, 3D pop-up landscape in which all the ingredients are in constant and infinite interaction.

If Rovelli sometimes colors his presentation, he’s always scrupulously up front about it. He calls Einstein’s new and intimate vision of the world “beauty in its pure form.”

For Rovelli, Einstein’s great if theoretical outline, when grasped, carries the same impact as, say, as hearing Mozart’s “Requiem,” or absorbing the human immensity of “King Lear.” This is an author for who 20th-century physics glows with excitement and beauty, creating a framework for nearly unimaginable insight.

The book’s second chapter, “Quanta,” tackles some of the most problematic questions in modern physics. Relativity Theory and Quantum Mechanics are both perfectly proved in application. Thanks to Einstein, man landed on the moon. Quantum science has helped humanity develop sophisticated technology in fields as diverse as biology and communications.

Yet in scientific terms, the two theories contradict each other perplexingly. They remain two minuscule, still-unattached puzzle pieces within the overall cosmos.

Rovelli is even able to make Black Holes understandable to the lay mind. He accomplishes this through simple black and white sketches. Since demonstrable proof is lacking, Rovelli plays theoretician, explaining and speculating.

Next come particles, and the unexpected connection to Joyce. In 1964, American physicist Murray Gell-Mann decided to name the tiniest particles of subatomic matter yet discovered “quarks.” It’s a nonsense word in an apparently senseless sentence in Joyce’s language-breakthrough epic, “Finnegan’s Wake” (“Three quarks for Muster Mark!”)

Gell-Mann thought of the word at a time when quarks were barely defined, and only three were known.

That an investigative and visionary physicist like Rovelli would end his volume with on a philosophical note is only “logical.” His final lesson, “Ourselves,” ponders the role of humans in the “great fresco of the world offered by contemporary physics.”

His thoughts draw from ancient Roman poet and philosopher Lucretius, who in “De Rerum Natura” wrote: “…we are all born from the same heavenly seed; we have the same father…” Or, in Rovelli’s words, “We are made of the same star dust of which all things are made…”

This is a magnificent journey through the path, still in its infancy, of discovering the many meanings of that celestial stardust.