A man and a woman 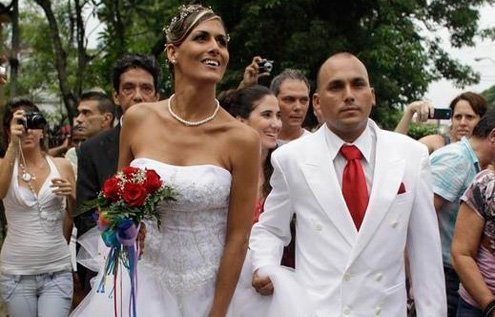 he line comes up often: “Marriage is between a man and a woman.” It is not the word of God. It never has been. But it’s close enough for most religious zealots to justify denying LGBT people the right to fully participate in society and barring them from trying to build a stable family life for themselves based on the cards they were dealt.

On July 4, Alberto and I celebrated 19 years together as a couple. In September, we will celebrate our 10th wedding anniversary — legal in Canada but still not recognized in Italy.

In mid-July we were invited to a wedding reception between a Brazilian man, who has lived in Italy for the past five years, and an Italian woman. We knew neither the bride nor the groom.

The reception was held along the famous Naviglio Grande canal, but far enough out that we got lost. It was a sweltering Wednesday evening. By the time we found the place we were hot, tired and a little grumpy. Not to mention that I really don’t like weddings.

“Let’s not stay long,” I said to Alberto as we rode up in the elevator.

We were immediately sent up an industrial staircase to the rooftop terrace, where funk music was playing. There were some 30 guests. Some were obviously hetero, some homo, some bi, and some … who knows. But we were in friendly waters. I’d been told the bride was a lesbian.

And here she was, a smiling young woman in jeans and a t-shirt who walked up to me and handed me a cold beer. She showed me her wedding ring. I kissed her on the cheek, showed her my ring, and introduced her to my husband.

A few minutes later we met Brazilian groom, tall and elegant and wearing a black dress. Judging from his breasts he’d probably undergone hormone therapy and may have had even had buttocks implants. I hesitate to use the term transsexual, or any label at all, because I’ve known many men who’ve undergone hormonal therapy and plastic surgery without any intention of going through with the “snip and tuck” to become an anatomical woman.

In biology, individuals that are not differentiated sexually as male or female are referred to as intersex. The term third gender has been used to describe the transgender hijras of India, Bangladesh and Pakistan, who have only recently gained some legal recognition.

This leaves us to question preconceived notions (fortified by religion) that people must belong to one of two and only two sex/gender categories. In reality, the dichotomy may not accurately describe who a person is physically, mentally or socially.

But Italy is peculiarly tolerant in this regard. While bride and groom may not be typical, they do meet the legal gender requirements and are entitled to marry under Italian law.

As for “love,” if every heterosexual couple were required to show proof of “love,” many marriages would be immediately null and void. Others would never have taken place. The Milan bride and groom had been friends for many years and shared an apartment. Their interaction made it clear they were two people who cared about each other.

As for insisting that marriage is a vehicle for children who’s to say the Milan couple won’t? And when has having children ever been a requirement for a heterosexual marriage?

As a lesbian living in Italy, a society that sees the role of wife and mother as paramount, the bride will face a host of obstacles and difficulties. As for the groom, he fled the prejudice and discrimination of San Paulo, Brazil (which he briefly described to me), traveling a long way in search of a new home.

While some might consider the wedding we attended as an attack on family values and on the traditional family (or any other euphemistic term given to the exclusive heterosexual bonding privilege), I saw two very lovely people celebrating a legal and social union, both clearly interested in creating a new and more stable life as a couple.

And God? He apparently couldn’t be bothered scowling on this union, since instead of fire and brimstone, he sent a gentle and cooling breeze under a starlit sky. Whether He can take credit for the cold beer, I don’t know, but credit for the funky dancing that followed was ours and ours alone.