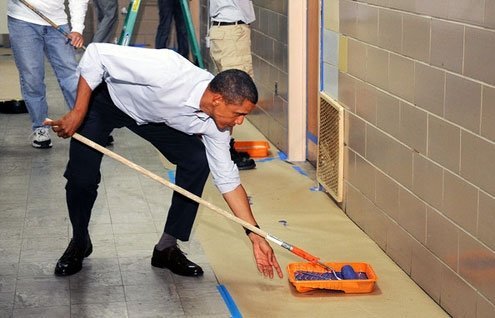 #8220;Yet for all of its general unhappiness, the electorate does not seem to be offering any clear guidance for Mr. Obama and the incoming Congress — whoever controls it — on the big issues.”

As never before, the American public responds to the national political scene with a mix of moody irrationality and mischievous melancholy.

But affluence is a great leveler. So is the disappearance of competing ideologies. The rewards of citizenship now include the shedding of impulse control in favor of a freestyle babble that is heavy on broad-spectrum spite and represents its own kind of tyranny.

Absent the prospect of invasion or starvation, highly impressionable citizens are easily made emotional and often infantile, creating an adult kindergarten in media and on the campaign trail.

The inflammable resentment heaped on U.S. President Barack Obama responds above all to a melancholy restlessness brought about by what amounts to a selectively informed citizenry’s long bad day. The hopeful sentimentality that swept Obama into the White House has succumbed to near-neurotic if imprecise impatience for the newest dose of change.

That pragmatist Obama refuses the shelter of presidential archetype — he is not an uncle, a warmonger or a therapist — infuriates those accustomed to the texture of such protection. In America, a resistance to lullabies shifts frustration into resentment unopposed.

American voters have many times punished messengers whose script appeared to cheat. But the punishment hasn’t always been upwardly mobile. Routed in the 1938 midterms, Franklin Roosevelt still won two more terms. Pulverized in 1994, Bill Clinton, the last presidential charismatic, brushed himself off and won the presidency again two years later, thanks mostly to an improving economy and divisions among his critics. Obama may well do the same.

But the right-wing road rage of the mid-1990s lacked the kindling of the Internet. All spreads faster. The strongman-inclined white men who found flirtatious Clinton deplorable and put punishment ahead of constructive criticism now target Obama as weak, deluded, or deceitful, sometimes all three. Meanwhile, the melancholy voters who impregnated his presidency with miracle-drug attributes are poignantly disappointed if not immobilized.

The September 11 terrorist attacks and their paranoia-driven aftermath helped created the inspired contagion that made an Obama-like presidency all but inevitable. What such a presidency most required as nourishment was a sound economy. Instead, it inherited worse than the opposite.

Even the language of economics is psychological. Depression is its worst-case scenario. Self-esteem and self-confidence are essential to fueling of nonessential purchases. People generally spend when they’re hopeful and happy, or believe in a nearness to both.

Lately the mood has emphasized distance: between the public and Washington, nothing new; and between the mass media and the presidency, which at the height of George W. Bush’s dogmatic emphasis on national security and patriotism was conspiratorially compliant.

In some respects, the decade-long obsession with terrorism cultivated insecurity as a form of identity. Alarm has since become proof of good citizenship (calling Obama a Muslim or a socialist fits into this category.) So has the technological infatuation with worrying aloud.

The Midterm ballot box has always been the country’s second opinion, particularly when a president wooed as a counselor fails to play country doctor or prescribe effective drugs.

The lack of clear guidance of the kind noted by The New York Times is predictable because depressives often don’t know what’s wrong with them. Their exasperation, whether in shutting down or lashing out, generates all manner of political panic attacks. Rancor becomes its own badge. America is the only superpower whose collective purpose is in such migratory flux.

The word symptom matters because no culture is as sensitive to mental distress as the United States’. None has such an excerpt of its population in the keep of therapists and mood-altering medications. None distinguishes so absolutely between aggressor and victim, or condones denouncement as a cathartic centerpiece of what Obama rightly calls “messy” democracy.

What polls are gradually discovering, however, is that denouncement itself is variable, manic, and hard to track. Disenchantment is by its nature unstable and doesn’t know itself well enough either to speak as one or to plan ahead.

There are those that steadfastly scorn both Obama and the whole of the political class. Others despise increases in government spending, whether on bailouts or health care. Still others rue Obama’s “betrayal” of the meteoric yearning that brought him to power (“He gets things done in very crippled way,” historian Gary Wills notes cruelly).

Unfulfilled hopes deject and depress. Powerlessness yields resentment. After which anything goes.