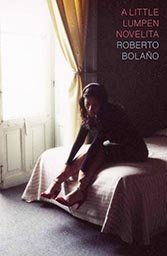 Roberto Bolaño won’t stay dead. Which can be a godsend at times. Unlike several other posthumously published tidbits, this 2002 novella upholds Bolaño’s uncanny legacy as an urban developer charged with building character, mood, and reminiscence. Narrator Bianca is an Italian girl whose parents died in a car crash on a “terrible southern highway.” She now lives with her brother in their parents’ Trastevere apartment, the two orphans partly surviving on their father’s meager pension. Her brother does odd jobs, though he’s fascinated with bodybuilding; Bianca works in hair salon.

Soon, the improbable duo is joined by two of his friends, a youth from Bologna and a Libyan. “Poor as rats,” they watch TV, porn included, and she placidly makes love to both her brother’s keepers. Until the troika pimps her out — she’s complicit — to a former champion body builder and B-grade Italian film star nicknamed Maciste. This is what she recalls as her “life of crime,” since in addition to being paid for sex she’s also charged with finding fat Maciste’s safe. The catch, introduced with deadpan aplomb, is that Maciste is blind, hurt in car accident in which two others died, a detail that leaks into Bianca’s bereaved life.

But there are two kinds of blindness here. Maciste’s is obvious. Bianca’s is her inability to fully fathom either her present or her future, infinitely attuned to the details of her surroundings while just as infinitely resigned to going nowhere fast. Bolaño has always given losers (and even humiliation itself) a dignity and moral luster they might otherwise lack, and he does it here with Bianca, his little lumpen girl, as close to a latter day Dickensian character as you’ll find. Her reminiscing task is to wake from the torpor of bad circumstances, “to do things and not die,” to respond. She does.

This is among Bolaño’s most existentially “Christian” works, laden with despair but redeemed through action — Bianca is now a wife and mother. While squalor and compassion are set (appropriately) in Rome, Bolaño’s true interest is in the “noiseless, eyeless storm from another world” that surrounds the condition of being. The book was dedicated to his son and daughter, which make the “forge ahead” message all the more poignant.