A lesson from Woody 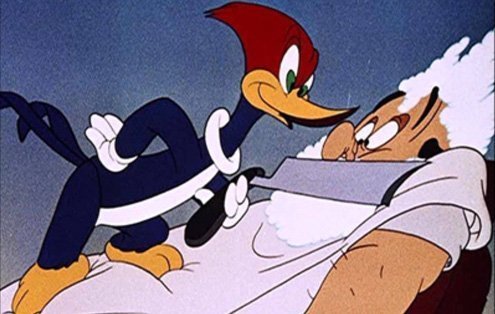 Woody Woodpecker is often portrayed as borderline crazy.
I

recently finished “I Never Promised You a Rose Garden,” a hugely popular fictional autobiography that I passed over in my 1970s college years, thinking it was romantic tearjerker. That changed when I saw that psychotherapist George Atwood, whom I admire deeply, had made it required reading for his Rutgers course.

Written by Joanne Greenberg, it was first published in 1964 under the penname Hannah Green. It is not a romantic tearjerker. It is a stunning psychological document: the first-hand account of the psychotherapeutic treatment of a severely disturbed and hallucinating schizophrenic teenaged girl. It chronicles her illness, her treatment with psychotherapy, and her gradual recovery. The book was an instant best seller and later made into both a movie and a play.

Greenberg, in her early 30s at the time, opted for a pseudonym to avoid being stigmatizing and harming her family. After half-a-century without a relapse, her parents dead and her children adults, Greenberg, well into her 70s, finally “came out” as the author of the memoir. In the interim she’d had a long and successful career as a novelist.

It turns out Greenberg’s therapist was German-born Frieda Fromm-Reichmann (known as Dr. Fried in the novel), among the most interesting characters the psychoanalytic world has known for a century.

The troubled main character in “Rose Garden,” Deborah, is finally institutionalized at age 16 after a suicide attempt, something her family doctor had repeatedly recommended throughout her childhood. A few weeks into her committal, she starts using jagged metal to savagely cut herself. She burns her skin with cigarettes. She’s transferred to the “Severe” ward. The 1950s offered few tranquilizers against psychosis. Heavily agitated patients were often wrapped in wet sheets and tied to their beds. Interestingly, this often occurred at the request of patients themselves, who were all too aware of their own potential for self-destruction. Much of patient dialogue takes place when they’re restrained.

For me, the story brought back strange but clear memories of a Woody Woodpecker cartoon I saw in the 1950s, when I was about four. My father was a tech nerd. He built his own radio with big vacuum tubes. We had a TV with UHF and VHF. Had computers existed, he probably would have built one from scratch. Among his many gadgets were a professional camera and a film projector. Besides filming us (long before VCRs), he’d buy “shorts” — short films and cartoons that movie theaters offered before the main feature — and play them at home.

Woody Woodpecker’s signature was his outrageous laughter, a machine-gun burst of “ha ha’s.” It was his introduction, and a hint that he was completely “cuckoo bird” crazy.

In the skit, Woody does something typically weird, and the other characters call in mental hospital employees, or “the men in the white coats” as they were called at the time. As I remember it, Woody is slapped into straitjacket and stuck on a stretcher. One of the orderlies then gestures at Woody with his thumb: “HE’s crazy, but WE’re different!” — and copies Woody’s laugh. In other words, they’re just as crazy as he is.

It’s relevant to what Greenberg says because aside from her extraordinary insights into what it means to be mentally ill, she also demonstrates a keen understanding of hospital staff and psychiatrists. The patients all know the staff members that can actually help them. They’re the doctors and attendants who understand that they’re fundamentally no different from the ward’s severe catatonics and the violent psychotics. Luck in relationships and life histories are all that divides them from the mentally ill. That’s made very clear when a psychiatrist who insists on maintaining his distinctness from the patients ends up killing himself.

Atwood’s wonderful book, “The Abyss of Madness,” suggests we’re in fact all capable of falling into the abyss of madness. It happens, he writes, when “the sustaining events of our lives have ceased to occur. People fall not because the bad happens, but because good stops happening… Strip any person of his or her sustaining links to others and that person falls.”

Helping someone depends on understanding the importance of these basic human links and how they make us all similar — whether we’re professional therapists, psychotics or depressives.

As psychologists, we can’t help anyone if we think “he’s crazy” but “we’re different.” There is no psychological “class” distinction. All too often our patients help us discover important things about ourselves. Those are the things that help us to know we’re not so different after all.