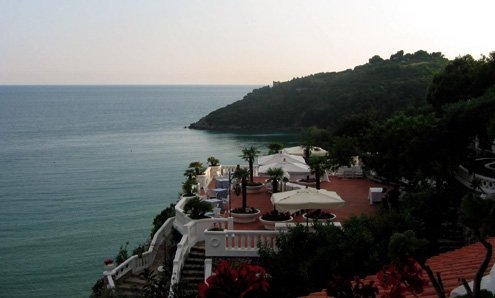 Gaeta is gorgeous but overlooked.
F

or those who love traveling in Italy but don’t want to pay an arm and a leg for their troubles, the solution may lie close to Rome. If fabulous hotels such as the Splendido in Portofino, the San Pietro in Positano, the Pelicano at Monte Argentario, the Posta Vecchia at Ladispoli, are superb examples inn-keeping and Italian living, they come with prices usually starting at €500 a night. For most people, these are honeymoon or once-in-a-lifetime rates.

As Rome residents, my wife and I wanted beautiful areas and excellent hotels, but we also wanted to keep our financial limbs intact. We found it amazingly easy to do. First, we set a budget limit of €250 a night. Then, we set out for San Felice Circeo and Gaeta on the Ulysses Coast south of the city.

The two hotels chosen were destinations in their own right. And getting there was part of the attraction.

San Felice Circeo, a volcanic promontory, is about 90 minutes south of Rome on the Via Pontina. Take the slower Via Appia, the Regina Viarum, (“the Queen of Roads”), which was the first road paved by the Romans and completed in 244 BC. It runs from the center of Rome, through the Alban Hills, and through the Pontine flats below Sermoneta to Terracina, eventually ending up in Brindisi, on the heel of Italy’s “boot.”

For centuries, Roman legions — headed off to conquer Carthage, Egypt, Palestine, Syria and the Black Sea area — marched along the Appia. The Appian Park, which is along the road, is an archeological wonder, with the remains of aqueducts, tombs, catacombs, and a “circus” bearing witness to the city’s grandeur.

Through the Colli Albani area, the Via Appia bustles with traffic. But after Velletri the tranquility of umbrella pines takes over. After Cisterna di Latina, there are 41 kilometers of road without a single bend, the longest stretch of straight road in Italy. Historical memory may not be a good idea at this juncture. When Rome quelled Spartacus’ gladiator slave uprising, some 6,000 insurgents were crucified on poles along the road. Instead, keep an eye open for signs to Ninfa, and the medieval hilltop town of Sermoneta rising 250 meters above the plain opposite Latina.

A religious struggle between two branches of the feuding Caetani family in 1381 resulted in the destruction of Ninfa, known as the “Pompeii of the Middle Ages.” The town once contained 10 churches, four monasteries, a municipal Palace, and a castle with a high tower. The ruins remained untouched for centuries, with crystal waters from the Lepino hills flowing through the lake and streams of the abandoned site. Today, all that’s left of are the ruins of the castle, the mills, and the churches. In 1920 Gelasio Caetani converted the site into a park where rare and exotic and plants thrive. These extraordinary gardens can be visited on the first Saturday and Sunday of each month from April to October, and on some public holidays.

Sermoneta, meanwhile, is a gem that has changed little since medieval times. The enormous Caetani Castle still looms over the town and valley below. Mentioned by Roman writers Virgil, Pliny and Livy, Sermoneta overlooks the Appia, which gave it strategic importance. In the 12th century, the Annibaldi family built the castle, and the two towers — the taller of the two 50 meters high. In 1276, Pietro Caetani, “nephew” of Pope Boniface VIII, bought the castle. The Caetanis expanded the property in the 13th century, building the impressive 25-meter-long “Hall of the Barons.”

Two centuries later, Cesare Borgia, an enemy of the Caetanis (Pope Alessandro VI Borgia had poisoned two Caetanis already), besieged and won the property. The Borgias made the fortress second only in strength to Rome’s Castel San Angelo. The Caetani repossessed their property through their connections with the next pope, Giulio II della Rovere. The Roffredo Caetani Foundation, which hosts courses, seminars, and concerts, now runs the castle. Daily guided tours (through sunset) begin on the hour except at lunchtime. Don’t miss the 12th century synagogue, now a private residence.

Back on the Appia, we head for Sabaudia. The road leads through portions of the extraordinary national park of Circeo, which contains the remains of Monte Circeo as well as 20 kilometers of sandy beaches. There are also four lakes and a forest of 18,500 hectares (18,700 acres). A UNESCO “World Heritage Site,” the park — where the remnants of Emperor Domitian’s Villa and Lucullus’ Spring are located — hosts 1,237 species of fauna and 250 varieties of birds; wild boar, deer and foxes also thrive. The town of Sabaudia, a Fascist-era creation with stunning beaches and dunes, is worth remembering as a summer destination: the beaches are lovely and unsullied and the pre-August crowds less dense than elsewhere in Italy.

Now it’s on to San Felice Circeo, and the Punta Rossa Hotel. Located on the southwestern part of the promontory (past the old town), signs make it easy to find the hotel. Spread out among the Mediterranean vegetation of Monte Circeo, the Punta Rosso is a four-star hotel owned by the Battaglia family. It has 27 rooms (seven suites), with additional apartments and park chalets rented by the week. The pool is built into the rocks above the sea, but most swimming is done off the rocks themselves. Most guests here are Romans taking a break from the rigors of the city.

You can hike or spend time in the spa overlooking the sea. Have a seafood buffet lunch near the pool (included in the price from June through August) with a bottle of Frascati. Dinner is in the ceramic-covered main dining room. The Punto Rosso is a glorious base for visiting the region, or simply to relax.

Towering above San Felice is 500-meter Monte Circeo, legendary home of Circe and her Sirens. As described in Homer’s “Iliad,” Circe drugged Ulysses’ 23 companions and transformed them into swine. Ulysses escaped with the help of Hermes, who concocted a potion that made Circe fall in love with him and return his companions to human form. Drive through the old town of San Felice Circeo to the top of the mountain and you get breathtaking views of the sea and the Pontine Islands.

Terracina is 14 kilometers to the east of San Felice. This is where the Lepine Hills meet the Mediterranean, forcing the original Via Appia to climb through the old town and wend its way along a cliff face before descending toward Formia. The road was even more tortuous until the Emperor Trajan sheared off 36 meters of overhanging cliff. Terracina’s “upper” town, which is medieval and contains a Roman museum, is fascinating. Part of the original Roman road has been preserved at the Piazza del Duomo and remains of Roman temples (wall, arches and forum columns) are also visible. More impressive is the majestic temple of Jupiter Anxur, poised atop 350-meter high Monte San Angelo. The Temple consists of numerous second-century BC remains, including impressive arched galleries.

From Terracina, a two-hour ferry ride takes you to Ponza, which is also accessible from Anzio and Formia. Along with its smaller sister islands of Ventotene, Zannone, Gavi and Palmarola, Ponza is of volcanic origin. Rock formations are formidable and colorful. Heavily colonized since Neolithic times, Ponza displays a wealth of Roman ruins dating from 313 BC, including enormous cisterns, tunnels, and the remnants of fish-farming facilities. In its history, the island has been attacked by pirates, Saracens and Turks. But it was the 18th-century Bourbons who resettled residents from Campania on the island. Mussolini was held briefly on Ponza after his 1943 arrest. Today, fishing and tourism support the island economy.

Go south from Terracina and you reach a rocky spur atop which lies Sperlonga. Winding steep lanes and stairs are commonplace in this village considered among the most beautiful in Italy. Houses are brilliantly white, beaches are clean, and the port is quaint. One kilometer from the port are the remnants of the summer villa (and caves) of Emperor Tiberius. In the nearby archeological museum, statues depict the legendary exploits of Ulysses. Tiberius narrowly escaped when a cave roof collapse. He prudently relocated to Capri. The museum is open daily from 9 a.m. to dusk.

Travel south another 16 kilometers and you reach the port of Gaeta, which houses a major American naval base. But never mind warships, it’s the Hotel Le Rocce that’s worth the trip.

Though the four-star hotel is hardly visible from the road, its inner attractions are abundant. It slopes toward the sea and its 57 rooms are layered down the cliff amid greenery and gardens. Don’t forget your sunglasses before heading for the beach, or face a long hike back to your room. There’s no swimming pool, but we loved the beach so much we didn’t even notice until our third visit.

Lunch is served beneath large umbrellas on a lawn-covered terrace above the beach. The local mozzarella di buffala with luscious Lazio tomatoes, followed by grilled lobster or scampi or local bass washed down with a local white wine, is delicious. You can hire a boat to explore nearby coves. Dinner, meanwhile, is delivered under the stars on a terrace of terracotta tiles and white pillars, with the shimmering lights of greater Naples sparkling in the distance. Family-owned, Le Rocce was an idea of the actress Gina Lollobrigida, who fell in love with the location in the 1960s.

Gaeta has its own charm. Positioned on a promontory, you can see Monte Circeo and the islands of Procida and Ischia on a clear day. A massive 18th-century castle and the adjacent Monte Orlando, which houses the impressive tomb of the Roman Consul Munatius Plancus, dominate the city. Plancus was a friend of Caesar who founded the Roman colonies at Lyon and Augst, near Basel. Near the picturesque medieval quarter is the cathedral, notable for its romanesque Moorish campanile, adorned with glazed earthenware, reminiscent of the belltowers of Amalfi. On the eastern outskirts of the town is the tomb of Virgil.

Gaeta’s strategic position was coveted. It became Byzantine territory in 681 AD and was looted repeatedly by Saracen raiders even after becoming a papal possession in 712. In the 9th century, it turned into a dukedom that flourished for three centuries. Thereafter all wanted Gaeta: Normans, the Kingdom of Naples, Angevins, the Aragons, Spaniards, Austrians, French, and finally the Bourbons. It became a part of Italy in 1861.

If you head back to Rome along the coast, pause at the Allied war cemeteries at Anzio and Nettuno. Driving inland along the A1 Autostrada inland take in the rebuilt Monte Cassino abbey, site of one of the bloodiest campaigns of World War II.

For summer holidays, an apartment rental might be most appropriate. But if you seek a special weekend getaway, the Appia and places south can give you a memorable experience without breaking the bank.

About the Author: Adrian Doull