A large and troubled piazza 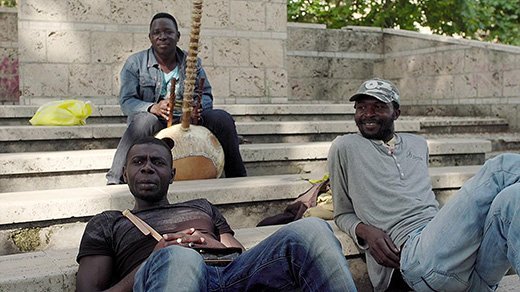 iazza Vittorio: an enormous rectangular space not far from Stazione Termini, Rome’s central train station, surrounded by magnificent 19th-century porticoes and graced by a gleaming multi-colored pavement polished to brilliance by more than a century of foot traffic. Once an elegant showcase of opulence and community, now degraded, perhaps beyond redemption, its residents indignant but exhausted. Drugs and crime abound: Nigerian pushers on the stairs leading from the subway to the Piazza; coke and marijuana available on park benches. At the nearby covered market one can buy not only fruits and vegetables, but hashish and stolen goods. In broad daylight, a man sleeps on his back under a portico on a slab of marble in front of an empty storefront. He’s wearing only a shirt and socks.

That’s Piazza Vittorio, as it was described on the “crime” page of the daily newspaper Il Messaggero, the morning after we screened Abel Ferrara’s engaging documentary, “Piazza Vittorio,” at the Apollo 11, an intimate theatre just down the street from the piazza.

While acknowledging the degraded state of the piazza and environs, the Bronx-born director, who lives in the area, offers an ambivalent, even positive, perspective. The immigrants who now dominate the area are for the most part depicted as joyful, musical, hardworking, and grateful for the opportunities offered by Italy, Rome, and the piazza.

An Egyptian butcher talks enthusiastically about his 20 years at the market, once located inside the piazza. Implying the existence of anti-Muslim prejudice, he insists terrorism is unrelated to religion: “I could be a terrorist, you could be a terrorist.” A tall, skinny black man from Africa stands beside a short, older Italian woman, the owner of a small kiosk-like coffee shop, who hired him 10 years ago. “We were the good immigrants,” he remarks, suggesting more recent arrivals possess few skills and fail to learn the language, to integrate. Immigrants from Bolivia, Peru and Ecuador dance to celebrate the Incan New Year at nearby Colle Oppio.

Veteran American director Abel Ferrara gives a movie about a lesser-known side of Rome a broader appeal.

A cheerful middle-aged woman in a classic Chinese sheath dress, 26 years in Italy and the owner of a restaurant, humorously describes being robbed at gunpoint by a Roman; she recognized the accent. (The Chinese arrived at Piazza Vittorio in large numbers after 2000, by some accounts precipitating the flight of Italians and the decline of the area.) Several of those interviewed take pride in Piazza Vittorio as a wondrous physical space, the “biggest piazza in Rome.” Others appreciate life in the piazza, whatever its difficulties, in relationship to the despotic regimes from which they fled.

Celebrated Italian Director Matteo Garrone (“Gomorrah”) says in an interview he wanted to go al’estero (“abroad”) and so came to live in Piazza Vittorio.

Yet “Piazza Vittorio” is no hymn to the piazza. American actor Willem Dafoe, also a resident, relishes the anonymity and petty-capitalist community of the piazza, but he cannot help but express his disgust at a man he saw defecating in front of two horrified old ladies. An interview with a spaced-out Bosnian stands in for the drug problem —arguably inadequately.

Interviews with Italians who remain in the community reveal concerns. An Italian who continues to have a stand in the market, surrounded by immigrants, proclaims “I’ve integrated”— a suggestive reversal, and one that implies he would rather be among Italians. In the park, an older Italian woman has come to accept the head scarf worn by Muslim women, but feels uncomfortable with those who cover their bodies and faces. Another laments that the park once had a public toilet but “now the whole park is one.” A long sequence of the homeless, asleep on the streets and in the piazza, is sufficient to dispel any notion of the piazza as an idyllic space.

A discussion with articulate members of “Casa Pound,” a right-wing, anti-immigrant populist group, effectively presents the case for limiting immigration.

Nostalgia for the past comes through as more than one woman bursts into Italian song. And Woody Guthrie’s “If You Don’t Got the Do Re Mi” lends a joyful, if ironic tone to several scenes. Still, Ferrara avoids the temptation to glorify the piazza’s past; a film clip from decades ago reveals heaps of garbage and people sleeping among the neglected Roman ruins.

The film raises two problems. One has to do with method. Interviews with two celebrities who live in the piazza—Garrone and Dafoe—arguably color the film as excessively positive. In addition, all interviews are with those who currently reside in the area; none are of people — perhaps those with more critical perspectives — who left amid the immigrant tide.

The second problem emerges from the relationship between this documentary —an effort to p rovide some insight into Piazza Vittoria — and the indictment offered by Il Messaggero. Which one is true? Which one more true? Which one best describes the piazza?