A killing for the good of man 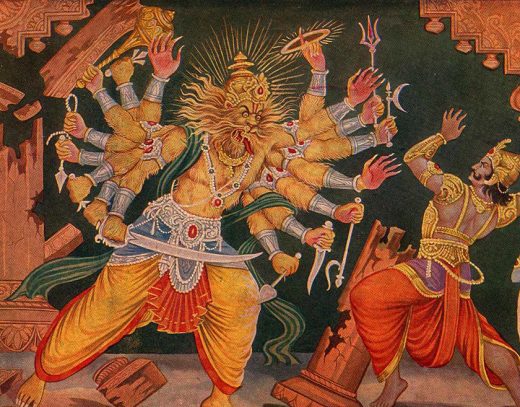 have a weakness for polytheism. I enjoy digging into the often intricate, kaleidoscopic dynamics of deities and their turbulent relations. The historical milieu and systems of values that can be extrapolated from the study of myths is probably the most fascinating and intellectually rewarding topic I can think of.

With such hobbies, it will come as no surprise that India incessantly amazes me, especially its Hinduist side. Hinduism, Islam, Christianity, and Sikhism are that country’s four main religions.

The richness of the pantheon of Hindu gods is overwhelming, and a lifetime wouldn’t suffice to explore it in depth. Though I know I can’t put the ocean in a bowl, I’ll limit my focus here to a single drop, in the form of a legend I hold dear. It involves one of the ten incarnations of the god Vishnu.

Vishnu is one of the primary (and most ancient) gods of the Hindu pantheon. He is mentioned in the Rig-Veda, Hinduism’s oldest text, which dates back to around 1,500 BC. He is represented then as a minor god. His position gains importance with the passing of the centuries, until his appearance in the texts known as “Puranas” (3rd to 10th century CE). It is in these texts that he ascends to his position as one of Hinduism’s three central gods, along with Brahma and Shiva. This trinity is known as Trimūrti (“three forms” in Sanskrit).

Incarnations, the notion of gods descending to earth in a flesh-and-blood body (the word literally means “to don flesh”), in order to fulfill specific missions, are a common pattern in many religions. Hinduism abounds in such incarnations, and the incarnated figures are known as “avatars” (a familiar 21st century word, albeit in another context). Gods typically have several avatars, each of them representing a cycle in the interaction of said god with human life. Existence on earth is perceived as a circular path in which life and death alternate ad infinitum, with karma permeating every individual action. In such a belief system, the idea of a god returning cyclically to earth under different forms, interacting with humans and marking the different eras in human history, becomes quite logical. Of the 10 avatars Vishnu is known to possess, I now turn my attention to the fourth one, Narasimha.

Existence is a circuitous state, with karma permeating every individual action.

According to the myth, during his third incarnation as the avatar Varaha, Vishnu killed the asura known as Hiranyaksha in combat. In Hindu tradition, asuras are evil beings, often referred to as “demons” in modern literature. The “demon” reference is for the sake of simplicity, though the word is clearly inadequate. As a result of that killing, Hiranyaksha’s brother, Hiranyakaśipu, swore revenge and became Vishnu’s archenemy. Following a carefully concocted plan, Hiranyakaśipu performed penance and austerity for 12,000 years, after which Brahma, the creator god, conceded him an extraordinary boon: Hiranyakaśipu could not be killed by any god, man, or animal, by day or night, neither on earth nor in the air, neither indoors nor outdoors, neither with animate nor inanimate weapons.

All but invincible, Hiranyakaśipu became a tyrant, overturning world order, abusing humans, and deposing the gods, while proclaiming the supremacy of the asuras. Eventually, he ordered the murder of his own son Prahlada, who happened to be a faithful devotee of Vishnu. This cosmic imbalance required cosmic intervention. Such is the scenario leading up to Vishnu’s fourth incarnation as the avatar Narasimha, a creature with an anthropomorphic torso and lower body, with the face and claws of a lion. This creature manifested itself by emerging from a pillar set at a threshold, best visualized as an intersection.

The whole scene serves the purpose of killing Hiranyakaśipu without violating Brahma’s boon. Hiranyakaśipu could not be slain by any god, man, or animal, but Narasimha is a god incarnated in a half human-half animal body; the asura could not be killed inside or outside, by day or night, hence he is killed at dusk on a threshold (in that an intersection is between one state of place and another); he could not be destroyed on earth nor in the air, and no animate or inanimate weapon could defeat him, so Narasimha places him on his lap and disembowels him with his claws — nails are, after all, neither animate nor inanimate.

Liminal deities are associated with knowledge, wisdom, and sometimes witchcraft.

What truly fascinates me about this myth is the idea of a cosmological order restored through “boundary defiance,” an anthropological formulation that suggests using all means necessary to restore balance, as mentioned above. The narrative behind the story is entirely focused on the symbolism of the border-crossing. As a matter of fact, thresholds, crossroads, and other symbolic intersections are very common patterns in mythological accounts. They are often the home of what historians of religions define as “liminal deities”: gods frequently associated with knowledge, wisdom, sometimes witchcraft, and the many symbolic possibilities the idea of liminality suggests. One example among many is given by Ganesha, the Hindu god-elephant, Lord of the threshold and typically associated with philosophy, letters, intellect, and the removal of obstacles (I will focus on Ganesha in my next column).

The key to Narasimha’s myth lies in Vishnu’s nature: he is the Preserver of the Hindu trinity (while Brahma is the Creator and Shiva is known as the Destroyer). Together they represent the forces through which the universe is cyclically created, preserved, and destroyed. Narasimha’s boundary defiance epitomizes the concurrent moment in which every single notion is challenged in order for things to remain unchanged. Fascinating mythology, to say the least.

— The author recently returned from India, which she has visited several times.