A homage to Orwell 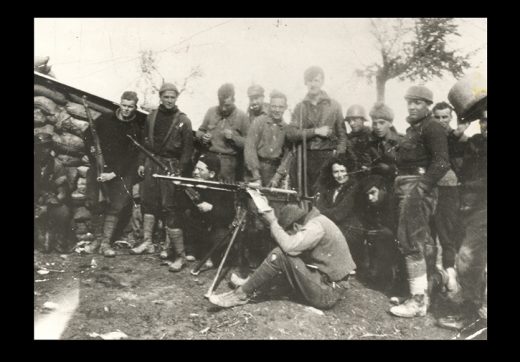 George Orwell (behind gun) with his first wife Eileen O’Shaughnessy on the Aragon front during the Spanish Civil War.
P

eople who know George Orwell only from having read his famous novels “1984” and “Animal Farm” might be surprised to learn that he was a committed and lifelong socialist, to my mind one of the best and most honest.

But both “1984” and “Animal Farm” are quite clearly critiques aimed at the Soviet Union. How could Orwell have been both a socialist and an antagonist of Soviet socialism?

Devoted Leftists would likely point out that criticism of communism from a socialist perspective (and vice-versa) has existed since Marx and Engels wrote the Communist Manifesto in 1847. But the differences between the two related systems remain unclear to almost everyone. If communism is contrary to socialism, and the Soviet Union was a communist empire, why was its official name the Union of Soviet Socialist Republics?

To make matters worse, the socialist-communist world is rife with sectarians who portray each other’s allegedly socialist-communist ideas as capitalist and even imperialist “ideology.” At times, theoretical antagonism has collapsed into outright warfare.

As for Orwell, he is best understood through his great memoir “Homage to Catalonia,” published in 1938. Few know he served in a communist militia during the Spanish Civil War, which raged from 1936 to 1939 and left some 500,000 troops and civilians dead.

What was the Civil War in Spain?

What I learned about it growing up (in my communist family) was that fascists attempted to seize power in Spain in 1936, which led to a working-class revolt and nationwide combat. It ended with a victory for the fascists (also known as the Falangists or Nationalists). We think of World War II as a world-wide defeat of fascism, but in Spain fascists remained in power until the death of Francisco (“the butcher”) Franco in 1975.

When the war broke out in Spain, Orwell was among many in Europe and the world who considered it a decisive historical moment. He traveled to Spain with the simple desire to learn how to use a machine gun and turn it loose on fascists.

Fascism did not die with Spanish dictator Francisco Franco. Look around. Just now, we need Orwell more than ever.

But it was not a simple civil war. The anti-fascist coalition (collectively the Republicans) consisted of an alphabet soup of organizations roughly aligned with Anarchists, Trotskyites, or Stalinists, each group with its own armed forces. For reasons that are unclear, Orwell signed up with a Trotskyite militia, even though he found himself more in agreement with the strategy of the Stalinists. It’s important to understand that even as the Anarchists, Trotskyites and Stalinists fought side-by-side against Franco’s fascists (assisted by Nazi Germany), they remained sworn enemies. Orwell’s association with the Trotskyite group POUM (Partido Obrero de Unificación Marxista) had near-fatal consequences for him later in the war.

He received some laughably inadequate training with an antique rifle (not a machine gun) and was dispatched to the Aragon front.

According to older communists I met in the United States, the aim of the vital Aragon campaign was to capture the city of Zaragoza and disrupt a planned fascist offensive. A decisive moment was the Battle of Belchite, with the city captured by the anti-fascists on Sept. 7, 1937. When news of the fall of Belchite reached New York, the slums of Manhattan erupted with joy. There was a spontaneous and illegal march down Fifth Avenue to Union Square where tens of thousands gathered to hear incoherent speeches shouted from the tops of cars. Mounted police were sent in to scatter the crowd, but working-class women — “God Bless Them!” —got the better of them by sticking hatpins in the flanks of the horses, who threw their riders. It was a day of triumph.

This, at least, is what I was told.

The shame of it is that Belchite was meaningless, militarily.

Fascist leader Francisco Franco’s pact with Hitler helped him prevail, and allowed Nazi Germany to test weapons it would then use in World War II. Franco ruled Spain unil 1975.

The attempt to take Zaragoza failed. The fascist offensive went on as planned. Belchite was retaken by Franco’s men, and destroyed. Franco decreed that the ruins should remain as they were as a living monument, a warning to others who might be tempted to oppose him.

Tragically, all this was part of a game within a game. The Aragon offensive was organized by the Stalinists not so much to annoy the fascists as to solidify their own political position vis-a-vis the Anarchists and the Trotskyites. It was a sham campaign. As Orwell writes, it was intended to fail.

It was characteristic of the opportunistic Stalin that he took 176 tons of gold from the revolutionaries in payment for his support. He supplied his factions with only enough military aid to guarantee failure with maximum loss of life.

Orwell was shot through the neck by a fascist sniper and nearly died of his wounds. While he recovered, he was sentenced to death in absentia by the Stalinists for having been associated with POUM. He fled with his wife over the border to France.

And fascism did not die with Franco. Look around. Just now, we need Orwell more than ever.