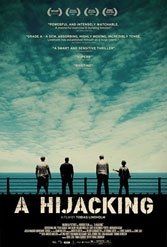 A story that ostensibly tracks the four-month-long hijacking of a small Danish merchant ship by Somali pirates is in fact an astute reflection on the complexities of negotiation, the attrition that goes with psychological warfare, and the relationship between prideful adversaries united only by their sensitivity toward money.

Director Tobias Lindholm plays his cards deftly. He introduces Peter Ludvigsen (Soren Malling), the hands-on CEO of a Danish merchant-shipping firm with a clinical flair for high-stakes negotiation, or so he believes. His self-confidence will be tested when the MV Rozen sailing toward Mumbai is abducted by a small group of pirates led by Omar (Abdihakin Asgar), a polished English-speaking go-between who is Peter’s Indian Ocean counterpart. Omar wants $15 million for the vessel and the release of the crew; Peter, who decides to deal with Omar directly despite the advice of a British crisis team expert, scoffs at the figure. The standoff yields a low-boil but troubling sat-phone tug of war that transcends traditional thriller fare and as Lindholm cuts between boat and boardroom.

Central in this frequently ferocious mix is the crew, led by its bearded cook Mikkel Hartman (Johan Philip “Pilou” Asbæk), who goes from looking forward to being reunited with his wife and daughter to becoming the representative of a 150-day ordeal that will eventual leave him and others shattered. A pawn in Omar’s chess game, Hartman is transformed from a jokester into ghost, while Peter — Malling is superb — morphs from assured corporate leader to someone who can no longer call the shots.

Above all else, the film is a transaction of a siege in which waiting trumps resolution, no matter the cost to those stuck in the middle.

“A Hijacking” (“Kapringen” in Danish) goes where it’s true-story counterpart “Captain Phillips” won’t and can’t: into the terrible tedium of passing months in which no army or SWAT team is on call to save the day. Hostages show their captors how to fish — an exceptional scene — but the goodwill is finite, and the months keep passing. “Time is a Western thing,” a hired advisor tells Peter. “It means nothing to them.” But within time’s slow folds is a palpably ticking bomb, a menace Lindholm milks for all it’s worth.