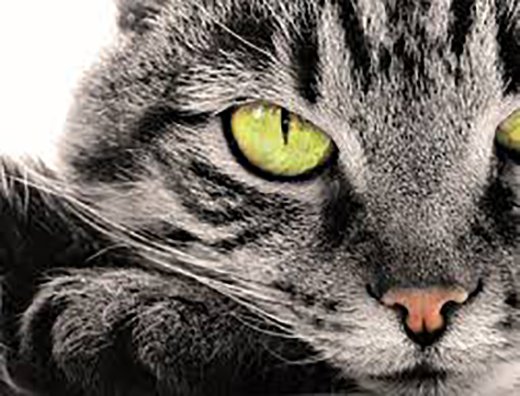 Eating habits change for health reasons, but what about love?
T

oday I’d like to talk about why I can no longer eat rabbit. In a world of vegans and vegetarians this might seem anything but a revelation. But in my case, the choice — and I’ll get to the feline-driven reason in due course — comes from a cook who once loved rabbit and cooked rabbit, salivating freely when imagining little morsels of said animal.

Don’t believe me? Read on.

For decades, I cooked rabbit tossed in flour, salt and pepper, sautéed in olive oil until golden and crisp. I’d then simmer in Marsala sauce until butter-tender, closing things out with a sprinkle of grilled pine nuts.

A little tapas place in our village in southern France serves tiny rabbit ribs from Spain. They’re deep-fried until very crisp and served with a thick, pungent tomato sauce in which you can dip the meat.

My favorite recipe was always rabbit spread thick with French mustard and cooked in a rich brown sauce complete with heavy cream and a good grind of black pepper.

Lièvre à La Royale, wild hare that has been prepared laboriously over three days, has been one of France’s great dishes since the time of Louis X

IV, who, lacking teeth, was forced to eat his favorite game with a spoon, hence the long preparation. In town, we have a friend who has promised us this amazing dish for several years now, but has yet to pull it off.

Now he won’t have to. I’m not certain if this make me sad or glad. I must say wild rabbit had a bit more clout in my dossier of small animal dishes (Cornish game hens, baby squid, quail).

My decision wasn’t sudden. Over the last few years I noticed myself moving further and further away from bleating lambs, veal (even the ones raised in pastures with their mammas) and the rabbit I once adored.

The “why?” of it I came to fully understand over time. So many people change their eating habits for health reasons: allergies, weight, illness, and a host of related reasons. But none of these reasons were mine.

When I think back, it was really very simple. One day, eight years ago, a small black and white cat wandered into our garden, and stayed on. I called her Loulou.

Imagining Speedy Bunny in a stew or skewered over coals was just too much.

From that moment forward, whenever I went to the local butcher, I took notice of coming literally eye-to-eye with a skinned lapin. Seeing its physical similarity to my tiny cat made me cringe.

Stroking her body on the couch, I would feel all the small bones and joints. My mind wandered to furry, long-eared bunnies hopping about in fields — the same creatures I had for years dissected and marinated.

As my cat grew into an opinionated writer with her own blog (I provided a small assist), exchanging thoughts with a fellow blogger named Speedy Bunny, I felt it was time to abandon that which had been a staple of my culinary repertoire.

Imagining Speedy Bunny in a stew or skewered over coals was just too much.

Is such a change in thinking just part of more mindful and enlightened living (one I often wished to embrace more broadly), or was it, at least in this case, a byproduct of that hazardous process known as falling in love?

You’ll have to put that question to Loulou, though I think she’s known the answer from the start.