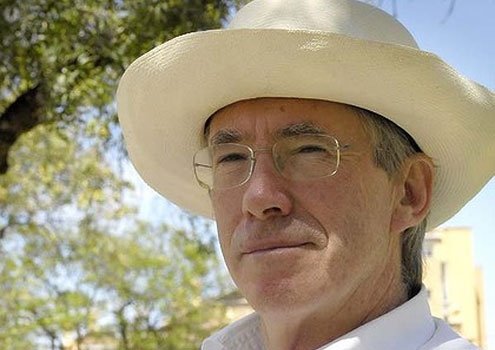 eet physics prof Michael Beard in his picaresque save-the-climate adventures. Running from the year 2,000 to the present. Though a Nobel Prizewinner 30 years ago, Michael is now an aging, gluttonous, money-grubbing front man in climate projects and scams. He’s the anti-hero in Ian McEwan’s exhilarating black comedy, “Solar”.

Focus? Environmental disaster, and the hunt for non-fuel energy that may prevent it. McEwan’s take? That our global warming crisis presents serious danger. Not least from its most fervent flag-wavers. The author’s signature mordant satire and taut, crisp language slashes a cast of willingly-misled scientists, bizarre inventers, blindsided supporters, and career-focused civil servants.

Jock Braby, British Administrator at Michael’s costly and futile micro-wind power center, warns him: “This better work. The wife’s right keen on my getting a Knighthood.”

Braby is one of the author’s Big Chief social targets. But the laugh’s on everyone here. McEwan’s comic attack is 360°. He even dissects three-chin Michael’s inexplicably numerous female conquests. Take the lovely, fortyish Melissa, as scenario-fixated as all Michael’s conquests. She grew up caring for an aged and dying father. Her lovers are elderly males. Beard gracefully accepts his ladies’ neuroses and psychoses. Provided the post-coital dinners and drinks are good. When self-interest is at stake, he’s a very accommodating man, in any adventure.

Why, he wonders, do so many women seek his favors? A mere glance from him, a hint, and they swoon. And how can he resist? It would be like refusing a double vodka with ice, or a packet of salt and vinegar crisps. That’s Michael on women.

Unfortunately, the year 2,000 brings a black hole collapse of his fifth marriage. Worse: it suggests further disappointment. Since the great Nobel, he hasn’t bothered to read new studies in his field. He already has a job. And there’s pleasant added income from board appointments and lectures.

As he notes: even an outdated Nobel talk is “sprinkled with Stockholm’s magic dust.” How long can that last? After all, three decades in the sciences is eons. And now this wind-turbine center promises ludicrous, reputation-damaging results.

“Still, it will all probably work itself out,” he reflects. “Things usually do.” Sure enough. When Braby kicks him from the wind project, Michael falls — but lands on his feet.

Entering the home of his estranged fifth wife, he finds his acolyte physics assistant sitting on the sofa — naked under Michael’s own dressing gown. “Tom, you’re wearing my dressing gown,” Michael remarks acidly, wife aside.

The next move is Tom’s. In an attempt to throw himself at the feet of his idolized Nobel hero, he slips on a polar bear rug and cracks his skull on a cocktail table. Ah, Michael considers, and recalls that another of his wife’s recent lovers — their own household repair man — had threatened Tom’s life. No trouble to clean up a bit of blood. And repairmen do forget their hammers. A now-bloodied hammer is found at the scene, with prints. Michael watches the repairman’s death-sentencing trial on TV.

So lady luck is with him. Soon he receives a box of notes Tom had earlier addressed to him. These contain solar energy information that young Tom had been futilely trying to explain to an ignorant Michael. Notes that Michael will slowly and painfully learn to understand. In order to develop his new, if dubious, SOLAR ENERGY business corp.

To gather funds, our hero of self-deception treks his growing bulk and sensual appetites from London to the Arctic Circle. During a trip across ice floes, he imagines his penis has frozen and detached into his pants leg, during an open-air Arctic pee. But: “Did this tube of lip cream just fall from your pants?” a beaming woman admirer chimes.

2009 finds him still riding fortune’s crest, and in a New Mexico desert. “Well, it’s certainly a desert,” Michael’s business manager concedes. Yet, Michael thinks this Solar Energy project can scam a few more million people, and bucks. Certainly, a massive number of solar plates are needed to briefly light the nearest strip village. Hopefully, people will give small thought to any practical daily use anywhere.

Our Laureate seems to be reaching his zenith. Until McEwan pulls the plot threads into one tight net, trapping him. Tidy ending. The bad guy loses, and the joke’s on him. After all, that’s how any good satire ends.

And “Solar” is a class-act satire. True to the genre, it’s not designed to hit your emotional bank. Just stun you to laughter and thought. If McEwen’s dire take is right, then we’ll all be abandoned by the in-fighting experts. And face death through climate disaster. But we’ll at least die laughing.