A Girl Walks Home at Night 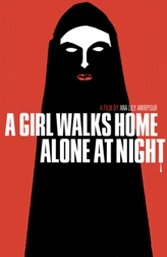 Ask yourself this: what’s a vintage 1957 T-Bird doing in a black and white Persian-language vampire flick whose razor-toothed heroin has a penchant for skateboards? If you said all that sounded just about right for the goings on in Bad City, you’re Ana Lily Amirpour’s kind of fan. Iranian-American Amirpour, you see, is all about mixing culture and genre — albeit tongue-in-cheek. She tosses B-horror trappings into spaghetti Western moodiness and cooks it up in a suburban landscape that’s a nighttime cross between Echo Park and Isfahan and includes a Nosferatu-like pusher with “Sex” tattooed to his throat.

Into this hallucinatory mix come son-of-a-drug addict Arash (Arash Marandi, who occasionally resembles Prince in his youth) and our headscarved, fang-rich heroine (Sheila Vand), who sullenly trawls Bad City’s weirdly empty boulevards for prey. Style over substance doesn’t do justice to what amounts to shoving a railroad-yards horror noir into a separate (and one would assume resistant) culture.

But Amripour pulls it off with panache. Both her laconic vampire and boy hero (boy meets thirsty girl) seem as estranged and hallucinatory in Farsi Bad City as they would in any other dark Dodge. There are bad fathers, mean dudes and quixotic femme fatales. Arash wears a Jimmy Dean bouffant. Camp makes camp. “I never met anyone who didn’t like hamburgers,” Arash tells the vamp outside a power plant, to which she more or less replies, “I’m bad.” It’s love at first pylon.