A Girl in Exile: Requiem for Linda B. 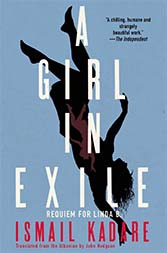 Albanian playwright Rudian Stefa sees ghosts. They are both mythical, a byproduct of his love of Greek literature, and “real,” the conjured face and body of an imprisoned young woman from “a former bourgeois family,” Linda B., who adored his work, and him, from afar, so much so she committed suicide to achieve an obsessive communion of sorts.

It is 1980, the twilight years of Enver Hoxha (“Tirana had never looked so forlorn,” says Rudian). The Balkan city is so steeped in half-truths and gossip that a man risks tilting toward madness. And Rudian to some extent succumbs. He learns of Linda B. through his latest if deeply enigmatic lover, Migena, who introduces herself into his life as —it will seem to him — a surrogate for his jailed lover. It seems the two women were best friends from the same town and Migena got his autograph on a play she then gave her friend, initiating a spectral connection in which love becomes a contagion and Migena “a courier of death.”

Kadare flawlessly mixes anti-regime jabs from the cantankerous Rudian (enraged by the censoring of his plays) with the plight of a man who becomes infatuated with the woman who wanted to be his but was estranged into ghost-hood by a regime uncomfortable with intimacy, fearing the irrationality of feeling as an “enemy of the people, a contagion to be suppressed. Rudian, once bold and hot tempered (“inspiration excited him…”), is gradually humbled by the mysteries of the case of the vanished dead girl, details of which he gets only in tablespoon dollops. Thoughts of Linda B. (and who she might really have been) are confined to elliptical if not surreal details provided by Migena. “Socialist realism didn’t allow ghosts,” quips Rudian bitterly. Yet he can’t seem to live without their formulation.

No one among writers from former Communist countries is as adept at Kadare at portraying the insidious effects censorship, which produces a dimming of self that fit hand-in-glove with isolated Albania, which in the end had only Angola as an ally. Hoxha sought to make Albania an enclave unto itself, a culture devoted only to its mummifying secrecy. Kadare, though now in his 80s (this novel was written in 2008), summons characters as acutely as ever. And his bite remains intact. An ubiquitous Tirana slogan reads, “The stronger the dictatorship of the proletariat, the greater the freedom!” Its twin, he says, might be, “Cancer brings happiness!”

The novel is dedicated to “young Albanian women who were born, grew up and spent their youth in internal exile.” Dedication aside, the novel is also about the vulnerability of creative artists, who when the external order stops making sense, turn to an imaginary world for solace. ‘Without knowing, I’ve been the cause of a tragedy,” says Rudian of Linda’s fate, which acquires tragic sweep. “In front of her, everybody was guilty: this country, the times they lived in, everyone, including himself.” This burden, while finally aired out, remains weighty nonetheless.