A gift of lace 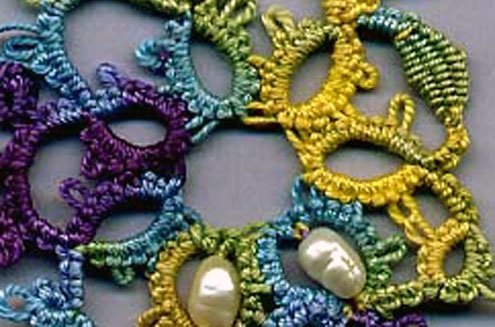 ita is the wife of my husband’s cousin. She tats. According to my mother-in-law that’s all she does — doesn’t cook, doesn’t clean.

“She does work full time,” I said once.

“She must do some cleaning.”

“Who cleans the bathroom, washes dishes?” Impossible that the poverino gets his hands wet.

On Sunday afternoons, when the family gathers at my mother-in-law’s apartment, Rita stays away.

“She’s up there now,” says Rita’s mother-in-law, Aunt Nerina, “doing her chiacchierino.” Rita and her husband live two floors up from my mother-in-law, one floor up from Aunt Nerina. The old ladies see Rita twice a year, at my house for Christmas, at a restaurant for Easter.

Chiacchierino, or tatting, is a kind of intricate and sturdy lace, made by looping a thread with a hand shuttle. When I saw it, Rita and I were standing on my balcony so that she could smoke. Wrapped in shawls, we watched bats swoop across the darkening sky. She carried her purse, a voluminous crocodile bag that still isn’t paid for and that makes Aunt Nerina explode every time her son mentions it, which he routinely does.

Rita took from her bag, and unwrapped from tissue paper, six exquisite coasters, made of tatting. My eyes could barely focus on the tiny knots, minute loops and peaks. She said that, when she tats, evenings, she loses herself in the emerging patterns. She finds peace. She said the coasters were for me and showed me the shuttle she uses. It looks like a fishing lure. She said, in the early 1800s, that’s the way tatting began — with fishermen mending their nets. She’s Pugliese. She remembered running on the beach as a child and watching the fishing boats come in. She and her father would buy fish and eat them right there, raw.

I recalled that my Dutch grandmother used to tat colorful borders around purse-sized lady’s handkerchiefs. Rita asked if she’d lived near the sea.

I imagined Grandma as a child running on the beach. Grandma’s lace was less intricate than Rita’s, the loops larger, not quite regular.

At Christmas, I hung the lace coasters on the Christmas tree. They’re beautiful, like snowflakes, each one different. Neither my mother-in-law nor Aunt Nerina noticed but Rita smiled and winked.

I don’t really know Rita. In the eyes of our Milanese family, she, as a terrone, is as much a foreigner as I am. I see her more than twice a year, but rarely. She’s never shown interest in me, or in what I do or think. I’m old enough to be her mother, after all. She endures the family gatherings in silence. When she talks, she talks about herself, mostly about her ailments, which are numerous, shifting and beyond diagnoses.

She drinks. She can down a bottle of whiskey in an afternoon and be steady and clear-eyed enough for a six-pack with dinner. She says that’s the way she was raised. She does not get drunk. Not ever.

She has a tendency to run up debt. She’ll buy €2,000 worth of silk underwear and six pairs of shoes on a whim.

Her weight can balloon and deflate several sizes in six months. Right now she’s svelte, elegant, heeled and bejeweled, her dark hair pulled back in a high ponytail falling to her shoulders.

I asked her to tat me a beautiful table runner that I can give to my sister. She said that I’m the only one in the family who appreciates her.

It’s true that I appreciate her. Before she came on the scene, I was a nuora who couldn’t do anything right — couldn’t dress, couldn’t cook, couldn’t care for my children. Now that the magnifying glass is turned on her, I’ve become a figlia who can do no wrong.