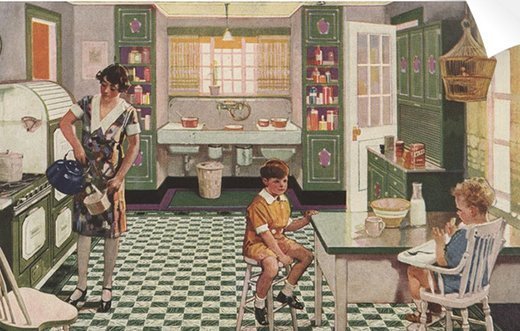 Before the onset of anxious shifting, many people just lived where they lived and called it home.
A

n acquaintance recently approached me on the street. Looking flustered and exhausted, she told me she’d had enough of New York City and wanted to leave. The chaos had become too much for her, she told me.

But the real problem, she continued, had less to do with her complaints about the city. Where could she go? After all, urban life was so convenient. Saying little more, she trudged down the street with her bag of groceries.

Since the encounter, I’ve noticed something that seems like a trend. I continually meet people determined to move.

For most, it’s a case of cumulative dissatisfaction.

It’s too hot in the summer, too cold in the winter. There’s too much noise, traffic, or people of the “wrong” kind. There’s no nature. Some have retired and want a different lifestyle altogether.

Growing a garden rooted my parents to the earth and gave them a sense of place.

Unable to find a solution, they seek temporary relief by flying to Europe, or Central America, or hopping on cruise ships. Maybe constant motion will cure their longing for change. Or maybe, at some point in their travels, they’ll find that longed-for better place.

This made me wonder about “better place” thinking as a whole.

What ever happened to longing for home sweet home?

Pondering this, my thoughts turned to my late parents and their Ohio house.

They lived in the same place for 50 years and it functioned as the family hub. It was never redone with modern upgrades, nor did they want them. The old four-burner electric stove sufficed for cooking, and any talk of remodeling was met with the same resistant refrain, “We don’t need it. What we have works fine.”

In the spring, the large backyard garden was planted with lettuce and spinach, with tomatoes and corn to follow. Growing a garden rooted my parents to the earth and gave them a sense of place. The apple and pear trees bore fruit and raspberries grew along the back fence.

They often entertained, but not by appointment. Whoever walked in would get a seat at the table and handed a slice of pie and a cup of coffee. Stories would be shared and gossip exchanged before the visitors were sent off with an armful of home grown zucchini.

The house was also in a constant state of disrepair. If it wasn’t the roof that was leaking, then it was the toilet that wouldn’t flush. Upgrading to a newer house never entered my parents’ mind. Home was home. Of course it needed fixing and maintenance. Of course things broke. What of it? Fix it and keep going.

And Ohio weather was far from perfect. Tornadoes took down trees and summers came with stifling humidity. Their home had no air conditioning, which didn’t matter to them. They preferred a bench swing under a shade tree where a cool breeze flowed past. The winters were no better, with frigid temperatures, icy rain, and burying blizzards.

They stayed in one place and simply lived their lives, making the best of what they had.

And though my parents’ house had an odd smell and the well water tasted of iron, the feeling of home was unmistakable. It felt genuine because it was. Whoever walked in was welcomed. What we had was what we had, and we made it enough.

I contrast these recollections to those of my contemporaries in search of a new and better country or lifestyle, a promised land somewhere just over the hill. It’s a place where the sun always shines, the food is great, and people think as they do.

But I suspect my parents had the right idea. They did not think in terms of promised lands. They stayed in one place and simply lived their lives. They made the best of what they had. They raised a family, weathered storms, and over time became part of a place. They didn’t yearn for anything beyond their front door, because they had what they wanted, home sweet home.