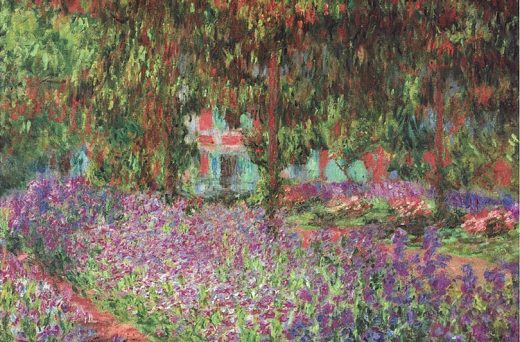 Detail from Monet's "Le Jardin de l'artiste à Giverny," a rendering of his rural garden the French artist painted in 1900.
I

call Jean, our neighbor in southern France, the Guru of the Garden. He is so full of information about what to plant and when that I have considered creating a small book of his earthen knowledge to be distributed to fellow garden-lovers every March, when the heavy decisions must be made.

Just a few weeks ago, I started to seed my peat pots with Big Boy, San Marzano and Chocolate Cherry tomatoes, knowing full well that I should have consulted Jean beforehand about the timing. Sure enough, the next morning, he asked if I had started my plants and I hedged a bit, giving him time to lay out the plan: Do not seed plants that grow above the ground until the moon is waning. Do start your root vegetables before the moon is round.

Jean’s garden is my inspiration, along with his sage (no pun intended) advice on every plant imaginable

Now why didn’t I know that? At least I had listened to him closely about when to plant in my broad beans — October or never. The fava bean, its Italian name, must be planted in the fall to produce a large crop in March and April, and those who think they can get away with pushing their starter beans into the soil in spring will be in for bare branches and nothing to nibble on with their pecorino Romano.

Jean knows his terrain, and voilà, right on schedule this year, my fava beans with their little exotic black and white buds flowered. What seemed like only a couple of weeks later, tiny fava babies shot out along every branch, pollinated by giant bees, black, beautiful and benign. You almost want them to land on you so that you see them better.

Of course, having sage in bloom ensured that bees of all kinds would be visiting in timely fashion. I was flattered when Jean asked me for a baby sage plant when I could spare it. I thought he had everything one could imagine in his magnificent garden on which one could put up several apartment buildings if one were an idiot.

Jean’s garden is my inspiration, along with his sage (no pun intended) advice on every plant imaginable. And oh, do I profit from having his bounty just below our property. The amazing kiwi vines that start at the back of his yard and are nourished twice a year from the lovely manure of our favorite mule and four donkeys wound their way upward to our garden fence several years ago, twining themselves through and around it so that we harvest hundreds of lemony kiwis every winter. What a neighbor.

For sharing, we have a large bucket tied to a nylon cord that I can drop down to oblige him when he calls out that he has un petit coucou for us — fresh eggs from his Rhode Island Red hens, plus carrots, onions, eggplants and more are the bounty from his green thumb.

Which is why I watch the moon carefully.

Just as it began to grow smaller, I confronted my beautifully turned-over soil with a large packet of mesclun and spinach seeds, not to mention the marigolds he had advised I use between tomato plants. 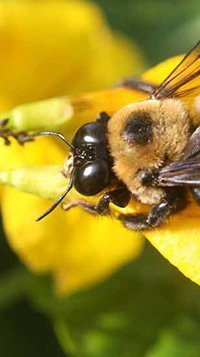 The green is pollinated by giant bees, black, beautiful and benign.

Gazing at Jean’s perfection — everything planted in perfect rows with dried reed supports artfully placed for eventual tomatoes — I was suddenly overcome with one of those “what the hell” feelings. Did I really have the time right now to make precise little ditches for my salad greens and push every tiny spinach seed into its furrow? An art expo with a friend was coming up, not to mention daily writing and tests for a cookbook and all the other happenings of spring that make us wonder what we did all winter.

As the moon shrank and with the bravado of an adventurer, I tore open my seed packets and threw care and the whole shebang to the wind, hoping something, somewhere would come up. Well, I’ll admit I attempted to throw the spinach seeds someplace different from the salad greens, just to appear to have some normalcy in a wacky garden. After all, I was going against my guru’s many consultations and a bit of guilt went flying with the seeds.

Yet a few short weeks later, as I was harvesting my succulently fat fava beans, I noticed a patch of green peeking out from the mulch under which my garden thrives. Tiny salad plants had come up all over the map —arugula here, lettuces there, and spinach babies suddenly springing up next to marigolds!

I have to admit, there is no way my brain will ever handle the exact planting of anything, regardless of taking advice from the world’s most knowledgeable garden guru. I am enjoying daily salads of helter skelter lettuces, even adding the flowers that are appearing a bit too soon because of our weather. My garden will never make the covers of magazines, and I am hoping Jean won’t ask for a visit to see what’s growing around here, but I can thank him over our mutual kiwi fence, as I pull up yet again the magic bucket, for letting me know that all one needs to have a green thumb is a waning moon.